The Aquadon (アクアドン) is a Frog-type Zoid, one of over 200 species of fictional biomechanical lifeforms depicted in TOMY's Zoids model, toy, and media franchise.

The Aquadon is capable of operating both in the water and, via wheels built into the underside of its body, on land. The Zoid is only lightly armed and virtually unarmored.

The Aquadon is created by the Helic Republic. It was the first Zoid specifically designed for aquatic combat. A relatively simple design, the Aquadon was nonetheless revolutionary for its time.

The Aquadon was one of the earliest Zoids, introduced somewhere around ZAC 1930. While its weapons were initially adequate against the first generation of Zoids, it was rendered obsolete with the arrival of newer designs; the Zoid was completely outclassed by the Zenebas Sinker once it entered the war. Both it and the Furolesios were largely retired by the mid ZAC 2030s, replaced with the far more capable Barigator. 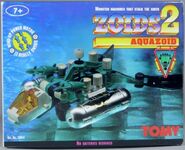 The Aquadon was released as part of the Zoids: The Pre-Hysterical Monster-Machines line. This version was unnamed.

The Aquadon kit was released in the first Zoids toy line, and came on three frames (one of which was re-used by the Furolesios), along with a small wind-up motor, cockpit, canopy cover, six rubber caps, two Styrofoam blocks, a small-chromed pilot, and label sheets. The Aquadon is moulded in grey, blue, and white. The head was shared with a number of other early Zoids, including the Glidoler and Elephantus.

The Aquadon, like the other early 'whitehead' Zoids, can be equipped with the optional weapons and equipment released in the Zoids Remodeling Set.

The Aquadon was released in Europe, under the Spider-Man and Zoids line. It bore the name Aquazoid. There were no changes to the model, other than with its packaging.

The Aquazoid was released as part of the Zoids 2 line in 1995. The ballast tanks and body were recolored in chrome silver and light blue respectively, and an orange cockpit canopy replaced the old dirty-brown version on the OJR model. A variant exists which appears more common among the Asian Zoids 2 line: the light blue is darker and less aqua-tinged, and the cockpit is colored in a smokey-violet shade, rather than orange. Both have the same dark blue for their flippers and underbody, and both use white caps.

The Zoid was planned to be released as a part of the Starzeta line. However, it never saw production.

The Aquadon was released in 2006 by Toy's Dream Project in a boxed set along with the Garius, Glidoler, Elephantus, and Gargantulus. There were no changes to the model itself.