The Battle Cougar (RPZ-22 バトルクーガー) is a Griffin-type Zoid, one of over 200 species of biomechanical lifeforms that form the Zoid race depicted in TOMY's Zoids franchise.

The Battle Cougar is a Griffin-type Zoid, used by the Helic Republic.

Rare amongst airborne Zoids, the Battle Cougar is able to function in both aerial and ground-bound combat roles. One of the fastest flying Zoids ever created, the Zoid is comparable to other Zoids of the same era, like the Orudios or Gungyarados, and was far ahead of later airborne Zoid designs, such as the Storm Sworder. Additionally, the Battle Cougar is able to run and leap on the ground, with performance similar to that of a Liger-type Zoid.

In addition to being very fast, the Battle Cougar is also heavily armed. The Zoid carries a half-dozen medium to heavy beam cannons, and is capable of unleashing a devastating hail of fire on any target it faces. Backing them up are its powerful claws and beak, as well as a sharp horn. Its firepower can be further enhanced by the installation of Grade-Up weapons on the Zoid's back.

The Zoid is also compatible with the Transfighter Zoids. Its usual partner is the Shoteagle, as both Zoids are capable of flight.

The Battle Cougar first appeared in ZAC 2055, appearing in the aftermath of the Gilvader's defeat. The Helic Republic sent a force of new Zoids to invade the Guylos Empire by crossing over the polar region. Consisting of Battle Cougar, Godkaiser, and King Baron Zoids, and supported by the Transfighters, the force was initially successful. However, they encountered a Guylos force consisting of the Ice Blazer and Gungyarados, and were repulsed.

The remaining Battle Cougars were destroyed in ZAC 2056, when a meteor struck Zi. In the aftermath, the Republic lost the ability to manufacture the Zoid, and was forced to rely on the older Pteras.

The Battle Cougar's sole media appearance is in the Game Boy Color game Jashin Fukkatsu! Geno Breaker Hen (Evil God Revived! Geno Breaker Story), where they appear in pairs as random enemies in the lower levels of caves and higher levels of towers. Being flying Zoids, they are both hard to shoot and difficult to outrun.

The Battle Cougar was first released as a part of the Grade Up line. The kit comes on five frames, along with a battery-powered motor, four gears on three axles, two metal contacts, a battery switch, eight rubber caps, a small gold chromed pilot, and label sheets. The Battle Cougar is moulded in dark grey, white, bright red, and chrome gold.

The GU-03 Eye Flasher mounts on the Battle Cougar's back rather than its belly, and thus cannot be used with other Grade-Up weapons.

The Battle Cougar's motor does not come as an assembled unit like other Zoids, and needs to be built. The Zoid uses a single "AA" battery for power. Once activated, the Zoid walks forwards, the power connection on its back spinning. A square piece of plastic can be placed on the power connection port when there are no Grade-Up parts mounted. The wings can be manually positioned, and the cockpit can be opened.

The Battle Cougar was first released in 1990. 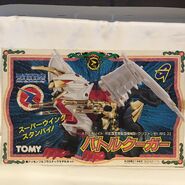 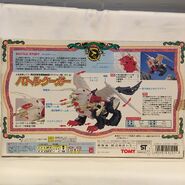 The Battle Cougar was released as a part of the Technozoids line under the name Storm Tiger[8]. The Zoid was colored in light grey, red, tan, and chrome gold. Additionally, it came with a version the GU-01 Dual Beam Cannon, the only time a Grade-Up weapon has been issued or made available outside of Japan. 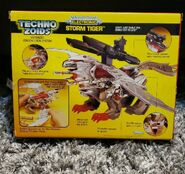 The Battle Cougar was released in 2003 by Hasbro.

The Hasbro Battle Cougar was recolored in bright yellow, light red, dull grey, and beige. Additionally, the Zoid's motor came pre-assembled, with the corresponding parts already omitted from the frames. The motor unit itself had several moulding changes, including the addition of a pair of screws over the battery case. The tail, while unchanged, now was attached via a slot in the two pieces of armor on the Cougar's rump, which came pre-assembled and held together by an added screw.

The Zoid was given the designation RZ-111 by Hasbro.

The Battle Cougar had a unique sticker of a rose insignia that is not found on any other publicly-released Zoid. This same logo was also seen on photos of the prototype Hasbro Houndsoldier and Cannon Caesar Zoids.