The Battlerover (バトルローバー), or Battle Rover, is an Ornitholestes-type Zoid, part of a race of biomechanical lifeforms from the fictional Zoids universe.

The Battlerover is a small-scale Zoid, and one of four models in the original Japanese line to be the result of fan "Design-a-Zoid" competitions.

In-universe, it was originally introduced when the Republic was driven into the central mountain range by the first Death Saurers. The Republic forces were forced to resort to guerrilla warfare tactics. The Battlerover was their high-speed attack and scout Zoid, as its mobility made it perfect for navigating in narrow spaces and rough terrain. Standard equipment for its pilots included a machine gun and a helmet with built-in infrared/night vision goggles.

In the manga, the Battlerover (or a Zoid very closely resembling it) appears modified for everyday use; considering the Battlerover's size and swiftness, it would have made a good civilian transport after the war.

The Battlerover was one of three small-scale Zoids the Republic used for mountain warfare in their struggles to resist the Empire in ZAC 2045, battling alongside the Neptune and Megatopros. It was used for hit-and-run tactics and scouting, having no real armor other than the transparent "bulletproof" plating that was standard for the Republic's 1/24 Zoids.

Its most notable service, however, would be as the mount of Rosa Lauri, one of President Helic's bodyguards (and his eventual wife). Imperial Captain Franz, bitter about his subordinates getting killed in a Republic ambush, volunteered for a plan to kidnap the President by smuggling a Roadskipper into a Republic base.

His attempt to grab Helic and run proved mostly successful, other than him taking a bullet to his shoulder, until Rosa caught up to his slowed Roadskipper using her Battlerover. The two clashed swords, as she knew the Battlerover would lose in a firefight, and thanks to Franz's wounded arm, Rosa and her Battlerover proved victorious; the President went back to the war effort with his trusted bodyguard at his side. Franz himself survived, as Rosa gave him a chance to abandon his mission and flee rather than killing him outright.

The Battlerover that appeared in the Chaotic Century manga was customized for everyday use, and went by Landrover in some copies (possibly because it was described as a "civilian version of the Battlerover"). It had a different appearance in terms of armor, having more covering its limbs but lacking the transparent plating that was used for the Battle Story version.

It was piloted by Rosa, Viola's little sister, and became the subject of one of Van's new missions: He was to find it and return it to its original owner, as it was borrowed and never returned.

When Van found the Battlerover, he discovered it was being used as a bus to get a group of kids to school—and the "school" was a nesting ground for wild Zoids, where the kids took care of them, clearing out the old nests. Their village, in turn, could profit from the "solar" scales the Zoids used as their nests. The trip took about three hours by Zoid, and the Battlerover meant a lot to the people in the village. Seeing all of this, Van then decided that it would be wrong to take the Zoid away.

Just like in the Battle Story, the pilot of the Landrover was named Rosa. While they are not the same character, this may be a reference to the Battle Story's Rosa Lauri. 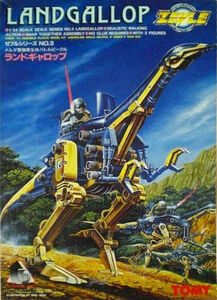 Zevle Box Art.
Add a photo to this gallery

The assembly is simple, similar to the Roadskipper and several other Zoids of the same period. The Battlerover possesses a sizable amount of transluscent parts, which covers the head and most of the body. The pilot has a human face.

The Battlerover was released in the Zevle line as Landgallop. It sported a different color scheme and a pilot that required painting/assembly.

The Battlerover was released by Toy's Dream Project, and had a monochrome box with a clear window to display the pilot figure.

The Zoid was released as a 1/72 scale Zoid as a part of the Command Zoids line. Unlike the Gorem, which was also released in the same way, the Zoid did not come in the Zevle colors.