The Beast Liger (ビーストライガー, Bīsuto Raigā) is a Lion-Type Zoid, one of over 200 species of bio-mechanical lifeforms depicted by TOMY's Zoids model, toy, and media franchise. It serves as the evolution of the Wild Liger Zoid.

Beast Liger is a Mid-sized[1] Lion-Type [2] Zoid. This motor-powered [3] Zoid uses the EB or Evo Blast Unit [4] to power many of its battle actions and features for a human Rider [5].

The Beast Liger features in the anime Zoids: Wild ZERO, where it is piloted by the main protagonist Leo Conrad.

The Beast Liger first features in episode 1, where it is seen in a basic form without any weapons. Leo uses the Liger in his job as a courier.

When Leo rescued Sally Land from Luc and imperial forces the soldiers were pursuing them in Scorpears Leo called his Liger and started destroying all the Scorpears until Luc arrived in his Cannon Bull and injured Leo and his Liger. While Luc was moving towards Leo Sally's pendent started glowing and she threw her pendant on Liger and an orange light covered the Liger and he evolved into its true form the Beast Liger. Then Luc activated his Cannon Bull's Machine Blast, Nine Cannons of Doom and started shelling on Beast Liger but it didn't affect Liger then Leo activated Ligers Evo Blast, Beast of Claw, Break and defeated Luc easily.

In Episode 2, Beast Liger stopped Sally from running away and at that time Sally came to know that not just Leo's left arm was not turned into metal but more than his hand. Liger also helped Leo give Sally a tour of his town. Leo fought Sergeant Shell and his Bazootle with Liger, when Shell used all his tactics against Beast liger he activated his Bazootle's machine blast and tried to destroy Liger but he failed and was defeated.

The Beast Liger features in the manga Zoids: Wild 2, where it is piloted by the main character. 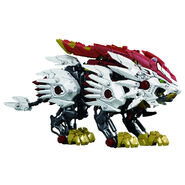 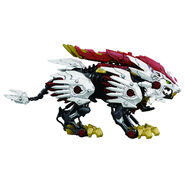 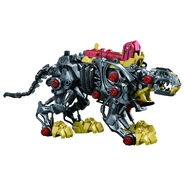 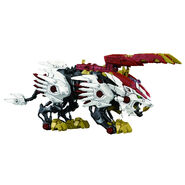 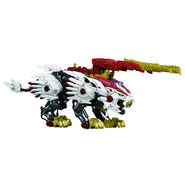 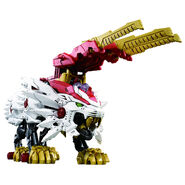