The Bigasauru (ビガザウロ known as the Giant ZRK in its UK release) is a Diplodocus-type Zoid, one of over 200 species of fictional biomechanical lifeforms depicted in TOMY's Zoids model, toy and media franchise.

The Bigasauru was created by the Helic Republic. It was the first-ever large-scale Zoid developed by either of the warring forces.

The Bigasauru was first deployed during the ZAC 1930s, working alongside other early Zoids like the Garius, Glidoler and Elephantus. The Zoid served as an assault unit, capable of taking on large formations or fortified emplacements all on its own. Bigasaurus also served as "motherships" for operations, coordinating and supplying units of the smaller Zoid types. In addition, the Bigasauru could be used as a troop or supply transport.

Unfortunately, it could not compete with the rate of technological change. The Mammoth, Gojulas, and Gordos surpassed it in every way. Furthermore, with the arrival of the Zenebas Redhorn, the Bigasauru was faced with an enemy that could easily dispatch it. By the ZAC 2030s, the Zoid was considered to be hopelessly obsolete. While a few were upgraded with the newly-developed Republican Supercannons, the design was retired from service. No Bigasaurus survived the meteor strike, and the design was too technologically-backwards to resurrect.

In the UK Zoids Comic, the Giant ZRK was one of the earliest large Zoids developed by the Zoidaryan Empire. Giant ZRKs would lead invasion forces of smaller Zoids, and were responsible for the early expansion of the Empire. Despite the development of newer Zoids, the Giant ZRKs remained in service and were a key part of the Empire's forces.

After the fall of the Empire and the destruction of the Zoidaryan race, the Giant ZRKs became a part of the Blue Zoid forces. While capable, they proved to be no match for Redhorn and the other Mutant forces. As a result, they were usually deployed defensively around the Blue Zoid factories.

Most of the remaining Giant ZRKs were destroyed by the Black Zoid. In the aftermath, the design was abandoned.

Oddly, some early issues and material (Such as the Legend of Heroic Combat book and tape) depict the Giant ZRK as a unique design like the other large Zoids, with his own personality. It is only during the fight against the Black Zoid that several Giant ZRKs could be seen defending the Blue Factory. But another story, showing events occurring earlier during the so-called 'Heroic Combat', portrayed a fight where a Giant ZRK was destroyed by a Spiderzoid. During this story, the Zoids were piloted by real, living Zoidaryans, and were not seen as living beings in their own right; afterwards, when they were piloted by androids, they developed their own traits as sentient machines. 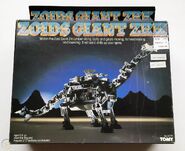 The Bigasauru kit comes on five frames; two are shared with the Mammoth, and a third is a weapons frame also shared with the Gordos, Mammoth, and Gojulas, along with a battery-powered motor, a second battery box, canopy cover, thirty-two rubber caps, a frame of washers, a metal weight, three small chromed pilots, and label sheets. The Bigasauru is moulded in grey, light blue, and white, with white weapons and an orange canopy.

The Bigasauru uses a pair of “C” sized batteries for motion. Once activated, the Zoid walks forwards and raises its neck. The neck-raising mechanism was also used on the Mammoth.

The Bigasauru was also released in Europe in 1984 with its 'Giant ZRK' name, as part of the Spider-Man and Zoids line. Interestingly, two different boxes were seen in Europe. The differences were minor, but one was seen with an upper part, like the small Zoids boxes, and the other without.