Formed from three of the Beith Republic's standard Zoids, the Bitegriffon was created despite the Republic's intolerance of combination as a desperate response to the Dinas Empire invasion and in particular its massive Groundrago. With the speed of a Hurricanehawk, the power of a Hardbear and the ferocity of a Bravejaguar, the Bitegriffon is a formidable opponent on the ground or in the air. It is much less savage and unpredictable than the large Dinas Zoids, and as such is controlled by only a single pilot. Nonetheless, its success in defending the Republic has earned it the moniker "Phantom Beast-King of the Wind".

Beith Bravejaguars, Hardbears and Hurricanehawks merged into Bitegriffons to halt and then drive off the initial Dinas invasion of the Republic's capital city.

Unfortunately, the debut of the G2 Rex presented an insurmountable obstacle for the Bitegriffon forces, which were annihilated by the new Dinas Zoid. 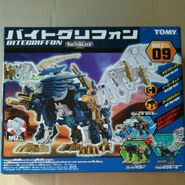 The Bitegriffon was initially available in April 2006 only by buying the individual releases of Neoblox NBZ-01 through -03, each of which included instructions to build it. In July, the Bitegriffon was released as a single box set, recolored with a unified color scheme.

No model of the Bitegriffon Spear was ever released.