The Brastle Tiger (ブラストルタイガー, EZ-076) is a Tiger-type of Zoid, and is one of over 200 species of biomechanical lifeforms that form the Zoid race depicted in TOMY's Zoids franchise.

The Brastle Tiger is able to absorb heat from the atmosphere around it, and then channel the heat through its various weapons. As a result, it carries a devastating array of weapons, making it far more dangerous than other Zoids of its size. Mounting ten Thermic Beam Cannons, as well as numerous other weapon systems, the Brastle Tiger is capable of taking on almost any opponent.

This system, however, does have one drawback; the Brastle Tiger produces an enormous heat signature, making it nearly impossible to hide. However, its high speed, huge weapons array and thick armour mean that the Zoid can usually handle anything that comes its way. The Brastle Tiger also features an ejection seat built into the cockpit[citation needed], a feature considered unusual for a land-based Zoid.

The Brastle Tiger features in the Three Tigers story.

It was created by the Zi-Arms corporation from one of the three ancient Tiger-Zoid cores discovered in ZAC 2230.

It was the last weapon developed by Zi-Arms during their conflict with the ZOITEC corporation. Acquiring the last of the three Ancient Tiger cores, Zi-Arms used the new Zoid to attack their rivals and kidnap the ZOITEC president. This was all just a front, however, to disguise Zi-Arms' true plan; the development of a new version of the Deathsaurer.

Unfortunately, when activated, the new Mega-Deathsaurer went berserk, attacking the Zi-Arms forces. After destroying the Decalto Dragon, it turned on the rest of the company, decimating them. However, the Rayse Tiger and Whitz Tiger appeared, and, joining forces with the Brastle Tiger, were able to destroy the rampaging Zoid.

In the Zoids Genesis Battle Story, the Brastle Tiger is a common Zoid type from the "Age of Technology." Unlike the regular Battle Story; the Zoid does not appear to be made from an ancient Zoid core. Its Thermic weapons are very potent, capable of melting the Hell Armour used by the Bio-Zoids.

The Brastle Tiger appeared in Zoids: Genesis as the personal Zoid of a Zuri officer, Colonel Tize. This Brastle Tiger is almost always escorted by a squadron of red Zaber Fangs. The Brastle Tiger's Thermic Blast covers an extremely large area and proved to be effective against the Hell Armour of the Bio Zoids, making it very potent. However, the Brastle Tiger must shut down for a period of time after firing, so its Thermic Blast must be deployed tactically so as to avoid endangering the Zoid.

After Dinga (leader of one of the Sabre Tiger factions) was killed in battle, a second Brastle Tiger appeared, piloted by his sweetheart, Gaball. Interestingly, the second Zoid was coloured like the Genesis release whereas Tize's colouration matches the NJR version, albeit with some parts slightly differently coloured.

The Brastle Tiger is one of the few Zoids shown to be effective against numbers of Bio Zoids, without the use of Metal Zi weaponry, or exploiting gaps in their armour.

The Brastle Tiger was featured as part of the Zoids Scramble release of Zoids Trading Cards.

The Brastle Tiger kit comes on eight frames, along with a battery-powered motor, a canopy, two Blox connector pieces, sixteen rubber caps, a small blue pilot, a display stand, and label sheets. The model also included a promotional DVD with animation of the Zoid. The Brastle Tiger is moulded in metallic black, dull metallic red, and silver, with a translucent red canopy.

Despite having a similar leg design and motion to the Shield Liger, it does not reuse any parts from older kits. The Brastle Tiger uses a pair of "AAA" sized batteries for motion. Once activated, the Zoid walks forwards with its jaws chomping while a cannon array on its back raises and closes. The Brastle Tiger also sports a quartet of opening weapons panels, ten opening heat sink panels, a pair of deployable panels on its flanks and a removable ejection seat.

The first production run of the Brastle Tiger featured a weak neck which would cause the Zoid's head to drop. This flaw was corrected on later versions. 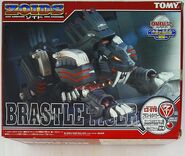 Several chromed version were released and sold in limited numbers in Malaysia.

The Brastle Tiger was re-released as part of the Genesis line as a part of the initial wave of "filler" Zoids, although it did appear in the latter part of the anime. The model's colours were changed; the model is now primarily silver, with blue, black, and gold components. The cockpit eyes are now orange. This version did not include the promotional DVD. 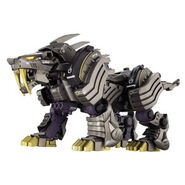 The limited edition Blitz Haken kit could be used as a customized part for the kit.