The Bravejaguar is a standard fast-attack Zoid used by the Beith Republic. Although relatively fragile by combat Zoid standards, it is an effective fighter at both short and long range. It was developed in part from the data gathered by numerous illicit "ZiEL" Zoid fighting tournaments.

Bravejaguars often operate alongside Hardbears and Hurricanehawks, and can combine with them to form the "airphibious" Bitegriffon. The Bravejaguar and Hardbear also make up two-thirds of the Valkyrie Caesar, with the remainder coming from the LB Murasame Liger. Using the Metalhopper as equipment to increase its speed and thrust, the Bravejaguar becomes the Bravejaguar Metal Boost Custom, although its pilots call it the "Metaljaguar".

Bravejaguars were deployed to oppose the Groundrago forces spearheading the Dinas invasion of the Beith capital. With fire support provided by Hardbears, the Bravejaguars were able to hold their ground, but eventually both they and the Hardbears ran low on ammunition. Their lines broken, the Beith troops were saved by the arrival of Hurricanehawks with which they could fuse to form Bitegriffons.

When the Empire renewed its invasion using G2 Rexes, many Bravejaguars were destroyed as part of the heavy Bitegriffon casualties. Major Rejirudo[1], in his Valkyrie Caesar, led a Bravejaguar platoon in a last-ditch effort to retake the capital and prevent the fall of the Republic.

The Bravejaguar appears in Zoids Saga DS under the name Neoblox Panther. Its Zi-Data cannot be recovered normally, but instead is only accessible via the Command Sheet; in addition, the Neoblox Panther does not appear in the Zoids Database chart at all. Its standard color scheme is slightly different from the model, lacking gold and with some of its blues and whites in different places. Its Brave Daggers are called "Breaker Knives", and its Bite Fang is called "Neo Bite Fang".

The Bravejaguar was released in April of 2006 as one of the first kits for the Neoblox line. Two versions of the kit were released, one with the designation "NBZ-01", which was the Bravejaguar alone, and another called the "Bravejaguar Set", redesignated "NBZ-07", which came with both the Bravejaguar and the Metalhopper. The Metalhopper can be mounted on the Zoid's back between its Twin Beam Cannons to produce the Metal Boost Custom. Both sets include one small, one medium and one large Neoblox, as well as a gold-chrome Republic pilot. 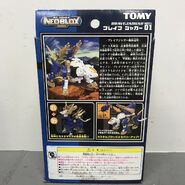 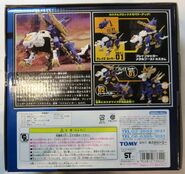 The Bravejaguar was also released in July 2006 as part of Bitegriffon and in September as part of Valkyrie Caesar.