The Buster Eagle (バスターイーグル) is a Eagle-type of Zoid, a race of mechanical lifeforms from the fictional Zoids universe.

The Buster Eagle is the first flight-capable Blox of the Republic other than the Nightwise. However, the Eagle proves to be a major improvement, more capable on its own than its predecessor. Its primary weapon is its Buster Cannons, which can also be equipped to the Gojulas Giga.

The Buster Eagle is shown as a fuzor with the Berserk Fury of Blake from the Savage Hammer team. As the Berserk Fury serves as the rival of RD's Liger Zero (something carried over from the previous series Zoids: New Century), the Buster Eagle may be that of the Fire Phoenix. Unlike the Phoenix, however, the Eagle is manned, piloted by Luke. Almost immediately after its introduction, it combines with the Fury to form the Buster Fury, adding extra firepower and flight capabilities to the Fury. It would not be seen again until the Matrix Dragon mini-arc, which it would fight against its "teammate" the Matrix Dragon while going after the Liger Zero Phoenix at the same time. Both the Fury and Zero Phoenix, were soon shot down by the Matrix Dragon, but before it could deal its coup de grace, the Energy Liger ambushed and fired on the Buster Fury and Matrix Dragon, damaging both Zoids beyond repair and even rendered unsalvageable for parts. However, this would not be the Buster Eagle's last appearance as it appears in a flashback revealing that Blake had given Luke the Eagle as a gift as his first Zoid. A joyful Luke promises to treasure the Zoid.

The Buster Eagle was featured in the Zoids Saga series as a fuzor zoid. It was able to combine with D.A. Lizards to form Griffin. The Griffin is also available in the Zoids VS series, where the player can buy the Buster Eagle's cannons and equip them to the Griffin.

The Buster Eagle made an appearance in the Zoids Scramble release of Zoids Trading Cards. The Buster Führer fusion was also featured in this set. 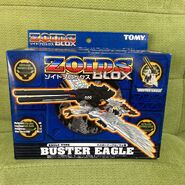 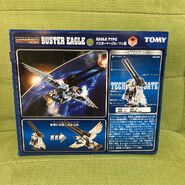 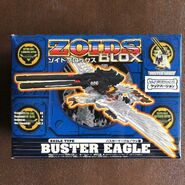 The model is fully posable, since it is a Blox Zoid. The wings, legs, etc. can be manually posed. The guns are very long compared to the model's body.

The model remains relatively unchanged, save for the dark brown parts recolored metallic red, is bundled with Berserk Fury and includes a red pilot figure. Like the Fire Phoenix, it has extra parts to fuse with its partner Zoid, the Berserk Fury and extra sticker sheets.

A Holotech Buster Eagle was sold at a Zoids convention exhibition in 2003. The box same as Blox with sticker label on it.

Combining The Buster Eagle with the D.A. Lizards (Leoblaze and Unenlagia) kit will produce the Griffin Zoid, a model seen on the the box art of the kits.