The Cannon Spider is a Spider-type of Zoid, a species of biomechanical life forms from the fictional Zoids universe.

The Cannon Spider is a Helic Republic Blox Zoid. It carries a gigantic rocket-launching cannon, comprising nearly half its mass, like that of the Missile Tortoise, but it has a much wider field of fire than the Tortoise thanks to a two-axis mount and a dedicated gunner.

Like all Blox, it can merge with other Zoids to form more powerful combinations. 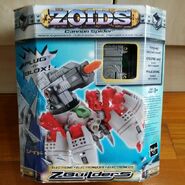 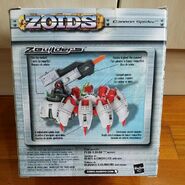 Cannon Spider was initially released as part of the Z-Builders in 2003. It never received a Japanese release in any form.

Cannon Spider is built from three sprues (light grey, dark grey and red), a number of large separate parts including the assembled spring-loaded missile launcher, and two Blox: one black "land" Blox and one silver Core Blox, both the original style. It includes one grey Republic pilot, despite seating two.

The cannon can rotate 360 degrees, elevate nearly 90 degrees and depress below the horizontal. The cannon fires one of the two included missiles and triggers an electronic "firing" sound.

On the side panels of the Cannon Spider's box, there are two combinations shown: in one, the Cannon Spider's parts and a number of extra Blox are used to make a side-mounted cannon for the Energy Liger, while the other shows the Cannon Spider's cannon mounting a contraption made of parts from Leoblaze, Nightwise, Unenlagia, and even D.A. Lizards, despite the last having never received a Hasbro release.