The Cannon Tortoise (カノントータス RZ-013) is a Tortoise Type of Zoid from the fictional Zoids universe. One of over 200 species of biomechanical life forms that provide the basis for TOMY’s model kit, anime, and comic based Zoids franchise.

The Cannon Tortoise is a heavily armed Zoid affiliated with the Helic Republic along with other Zoids like the Godos and Guysak. It has very heavy armor and was armed with a formidable long ranged cannon.

40 years of peace ended. The two forces met again on the Western Continent Europa. However, the Republic's forces were overwhelmed by the Empire's forces, who had been preparing for the war for years. Despite this, the Republic's forces tried their best to fight back. RZ-013 Cannon Tortoise was one of their mainstay Zoids. The Zoid's main purpose is to provide long-range fire support for the Republican army.

The Cannon Tortoise features often in Chaotic Century/Guardian force. The Zoid is used in large numbers by the republican army. The Zoid is never piloted by a major character, and usually serves to fill numbers in various battle groups. Seen fighting Zoids like the Death Saurer and Geno Saurer, the Cannon Tortoise has only minor impact on battles, and is either swiftly defeated, or simply ignored as the battles progress.

A special variant of artillery (nicknamed the Cannon Tortoise Double Cannonry Set by fans) shown in the series involves a huge cannon system mounted onto two Cannon Tortoises. Both Zoids support the weight of the weapon, while their main guns are replaced with modified targeting scopes and ammunition drums (for the front and rear Tortoises, respectively.)

During a flashback about Raven's past, a Cannon Tortoise appears in the background while he and his dad are on the roof. It appears to be equipped with a telescope for observing the stars. Numerous other Cannon Tortoises appear, and like their role in Chaotic Century, are either swiftly defeated, or ignored.

Harry Champ uses customised Cannon Tortoises in an early battle with the Blitz team. They are equipped with a CP-05 Large-Bore Beam Cannon and act as cover fire for the much faster Lightning Saix, piloted by Jack Cisco. Despite their heavy fire power, the Zoids were positioned too far away to hit their mark. Instead, Jack intended to weigh down the Cannon Tortoises so that Harry would be unable to interfere with his fight. The large, though inaccurate, explosions Harry created proved to be an effective distraction for the Blitz Team, confusing them with flack, and providing Jack with the opportunity to strike. The Cannon Tortoises were eventually defeated by the Liger Zero Jager.

In a later episode, Harry attempts to defeat the Blitz team using a Cannon Tortoise equipped with a Plasma Particle Gun. The Blitz team simply jumped out of the way and quickly defeated the Champ team.

In Zoids: Genesis, a new Zoid called the Beam Tortoise appears. While it is primarily modelled after the Missile Tortoise, the missile launcher was removed and replaced with a Cannon Tortoise-esque beam cannon. Furthermore, the Beam Tortoises were colored in either brown or green- the latter making the Zoid almost identical (both in appearance and function) to the Cannon Tortoise. In terms of plot, the Beam Tortoise only played minor roles, and as it primarily used a laser weapon, it was almost totally ineffective against Diglad's Bio Zoids. 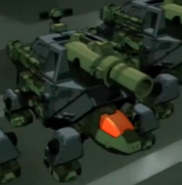 The Cannon Tortoise was featured in the Original Battle Game set and the Trading Collection Cards release. 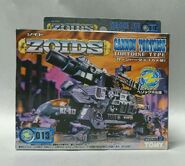 The Cannon Tortoise was released as part of the Zoids (1983).

The Zoid was released in 1987 under the name Kannon as part of the Spider-Man and Zoids line. The body was black and the green parts were becoming grey. It has also an orange canopy and blue caps. It was a part of the Blue Army.

The kit was issued in the Zoids (1999) line, and was almost identical to the Zoids (1983) version, with a slight change in the shade of the colors used.

In March 2003, The Cannon tortoise was re-issued as a Yuji Kaida limited as the sixth of their line. It features an exclusive box art and the kit comes with a recolored CP-05 Heavy Beam Cannon. The Zoid was recolored in blue and light gray with yellow caps.

The Zoid was released as a part of the Zoids: Build Customize Mobilize line. The American box art was Hasbro-branded.

On March 2009 a high-quality Cannon Tortoise was released by TOMY and Kotobukiya in the High-end Master Model (HMM) line. The HMM version features more detailed parts (such as a removable Zoid Core) and greater articulation but lacks the battery-powered motor of many of its predecessors. It was given the new designation, RMZ-27.

The Buster Tortoise variant was released on November of 2009. It features a CP-05 Large Bore Beam Cannon with a good level of detail. 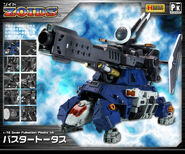