The Cannonfort (カノンフォート Cannon Fort) is a Buffalo-type of Zoid, a race of biomechanical lifeforms from the fictional Zoids universe.

The Cannonfort is designed for both assault operations and long-term independent operations. Though smaller than Zoids like the Dibison, the Cannonfort has a fair degree of firepower and protection, being one of the most heavily armed and armored Zoids of its size. Equipped with a mixture of projectile and beam weapons, the Zoid can adapt to different situations, giving the pilot a wide variety of tactical options.

One unusual feature of the Cannonfort is a small storage section built into the Zoid's chest. This allows it to carry extra ammunition or supplies, enabling it to operate on long range patrols or during long-term operations; when resupply bases would be difficult to access. The Zoid also mounts a powerful ECM system in its tail.

The Cannonfort was developed in the aftermath of the second Central Continent war as a part of the overhaul of the Helic army. It was initially designed to supplement and replace several older designs. It is based on the larger Dibison.

In the early ZAC 2050s, strange events began to occur across the Central Continent. Plants and animals began to die, the ground became parched and lakes and rivers dried up, as if the continent itself was dying. Shuu, a scientist from the Republic, determined that these events were being caused by something coming from the Dark Continent of Nyx. In response, an expeditionary force of Cannonforts was sent to the Dark Continent. There they found the source of the problem - the Dark Zoids used by the Guylos Empire.

The Cannonfort is an ancient Zoid from the Era of Technology. While already powerful, the Zoid is valued for its long-range cannons. Because they are projectile weapons, they are able to penetrate the Hell Armor used by the Bio-Zoids. The Zoid's armor is also very strong, making it sturdy against attacks. 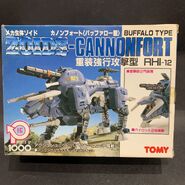 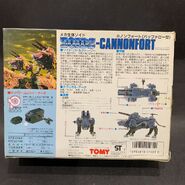 The Cannonfort was released in Japan in 1989 as part of the Zoids (1983) line. It was the last wind-up Zoid released in this line, and had a relatively short production run.

The Cannonfort comes on four frames, along with a large wind-up motor, a clear canopy, six rubber caps, two small chrome gold pilots, and label sheets. The Cannonfort is moulded in light blue, black, and grey with a smoke-colored canopy.

The Zoid uses a wind-up motor for its motion; once wound, the Cannonfort will walk forward while the turret on its back rotates its guns elevate and lower.

The Cannonfort was re-released as a part of the Genesis line in early 2005. The Cannonfort was a part of an initial wave of "filler" Zoids not based on ones in the Zoids: Genesis anime. This version had dull green armor and black structure, as well as orange canopies, and only came with a single pilot. There were some changes in the mold, suggesting that the original was replaced. There are known plastic quality issues with this release, as with other Genesis Zoids.