The Chimera Dragon (キメラドラゴン) is a type of Zoid, one of over 200 species of biomechanical life forms around which the Zoids model, anime, and game franchise is based.

The Chimera Dragon is not a standard Zoid; it is a Fuzor-type. The component Zoids of this Fuzor are the Demonshead, Diploguns, Shellkarn, and Flyscissors Blox Zoids. It is also designed for the Neo-Zenebas Empire, its data is used to develop the Scissor Storm, Laser Storm, Lord Gale, and Styluarmor. It is considered to be the opposite of the Matrix Dragon, which also has 4 component Zoids.

The Chimera Dragon first appeared in Zoids Fuzors, episode 18 "Glory for the man". The Chimera Dragon is shown as being a remote controlled AI. It analyses the opponents actions and then can predict their next move. However, during a fight with Mach Storm, the unit goes out of control and starts a rampage. RD eventually defeats the Zoid by de-fusing mid battle and confusing the AI.

The Chimera Dragon was featured in both the Zoids Saga and Zoids VS series'. It played a minor role in both. The Magnet Spear attack for the Chimera Dragon is referred as Hell's Gate. Once unlocked, the Chimera Dragon can be equipped with the Konig Wolf's Dual Sniper Rifle, or the Dark Spiner's Electron Jammer. Both weapons can be equipped on both sides of the Zoid and fire simultaneously. It can also be given a color scheme reflecting the original colors of the BLOX Zoids that make up its parts, as can the Matrix Dragon. 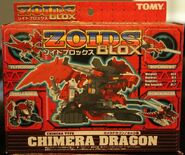 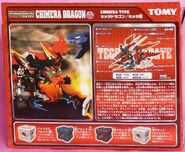 The Chimera Dragon was originally sold as its 4 separate blox components. Later, it was released as one kit including recolored versions of all 4 component Zoids. It had all of the instructions and sticker sheets for each individual Zoid as well as a instruction book and new sticker sheet for the fusion.

The Zoid and its component Zoids were released as a part of the Fuzors line in anime accurate colors. It was the same as the Blox version, but had a new 5th sticker sheet. The Zoid was recolored metallic red and black.

Gojulox is created by combining Demonshead, Leoblaze, Unenlagia, Nightwise, Diploguns, and Shellkarn. It first appeared in Zoids: Legacy as one of the final fusion options available. While fairly powerful, the fusion was not practical in the game, as it took up all 6 of the players Zoids. The player also had the option to build a Gojulox as one whole Zoid without using six separate Zoids. This option also applies to any fusing Zoids.