Chris[1] and Kelly Tasker[1] are fictional characters from Zoids: New Century. They are twin sisters and founding members of the Lightning Team.

Not much is known about these twins other than that they already fought together before joining Jack Cisco in the first half of the series to form the Lightning Team. They, like Jack Cisco, pilot the Lightning Saix. They have fought against the Blitz Team twice.

They would face each other again during the Royal Cup, only for the Lightning Team to be knocked out in the early rounds of the tournament, predominantly thanks to the introduction of Brad Hunter's Shadow Fox on the Blitz Team, which countered the Lightning Team's slipstream strategy.

Chris and Kelly slightly resembled each other in face, and had the same brown eyes and brown hair colour, but are distinguished by their outfits and hairstyles; Chris wears blue and has straight, shoulder-length hair; Kelly wears green and has slightly spikier, slightly longer hair. Brad mentioned that they were beautiful.

Chris and Kelly are shown to have the same skill as Jack in high-speed battles, and as such are some of the strongest warriors in the series. In the Zoid Battle Commission rankings, they score only slightly behind Jack, ranking 4th and 5th in the entire competition. It's their skill and control in piloting that catches the eye of Jack is one of the deciding factors that makes him form a team. Their team regularly maintains an "A" rank through the series.

They also appear to be good strategists as they and Jack came up with the slipstream strategy to use in battle.

They pilot Lightning Saixes like Jack, but theirs are distinguished from his by the appearance of a blue marking on the heads' Vulcan guns and red panelling on the shoulders.

Chris and Kelly have the following relationships with these people:

Jack: They are shown to respect their new teammate, although they made him do the night-watching duty during the Royal Cup.

Others: They do not make very much contact with others, but they taunted both Bit and Brad during their first match. 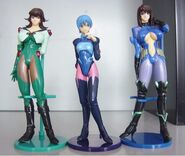