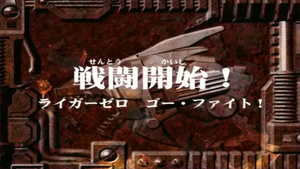 The episode starts with a scheduled battle between the Blitz Team and the Tigers Team, with Bit Cloud salvaging junk parts nearby. Seeing the start of the battle, Bit eagerly roams onto the battlefield, hidden from the Judge's sensors due to the use of the optical camouflage installed on his truck. The Tigers Team quickly attack the Blitz team, first taking down Leena's Dibison and then Brad's Command Wolf. Leon, the last remaining member of the Blitz team uses his Shield Liger's energy shield to ram and damage one of the enemy's Sabre Tigers. However, since the battle becomes a three on one fight, he tries to conserve his Zoid's energy and turns off his shield. Unfortunately for him, at this moment his Zoid collides with Bit's invisible truck and trips, allowing the Tigers team to surround him and deal his Zoid significant damage. Eventually, the Judge rules battle invalid due to Bit's involvement and schedules a rematch for one day's time.

Bit, feeling sorry for Leon, helps him out, eventually following him back to the Blitz team's base to make up for it. The Blitz team detain him, noticing that he had even "salvaged" parts from their own Zoids. He does not stay tied up for long however, as the Liger Zero moves by itself and severs his ropes, allowing Bit into the cockpit, giving him the opportunity to pilot it away. This comes as a surprise to the Blitz Team, as it was the first time anyone had been able to pilot the temperamental Liger Zero.

The scheduled rematch between the Blitz Team and The Tigers Team went under way, with Brad and Leena fighting against what appeared to be two Zaber Fangs (Leon's Shield Liger had been damaged too badly to be repaired in the short time frame). However, the third, damaged, Tiger was mounted with a long range cannon and used as a fixed turret to snipe the enemy Zoids. Leena was quickly surrounded, but the impromptu reappearance of the Liger Zero interrupted the Tiger's assault. Following a mid-battle registration Bit was made a Blitz team member, allowing him to defeat two of the Zaber Fangs, with Brad taking out the third.

Retrieved from "https://zoids.fandom.com/wiki/Zoids:_New_Century_Episode_1?oldid=62399"
Community content is available under CC-BY-SA unless otherwise noted.