The D.A. Lizard is a Lizard-type of Zoid, a race of mechanical lifeforms from the fictional Zoids universe. Its name is an abbreviation of Double Arm Lizard (ダブルアームリザード, Daburu Āmu Rizādo).

The Double Arm Lizard is a Helic Republic Blox Zoid. It is among the earliest combined Zoids to have been created, developed as a fusion between Leoblaze and Unenlagia. Because this fusion results in a Zoid with two cores, its power output is extremely high. This, in turn, leads to improvement in nearly every aspect of its performance, from firepower to maneuverability, although the increase in mass does limit its top speed.

Like all Blox Zoids, the D.A. Lizard can merge with other Zoids to create more powerful forms; one of the most notable is the Griffin.

A variation of the D.A. Lizards is the Shadow Arm Lizard, equipped with sensor-defeating stealth body armor and improved long-range firepower in the form of a potent beam launcher and a three-barreled missile launcher. This covert action Zoid has been given the whimsical nickname "Monkey".

Near the end of the war between the Helic Republic and Neo-Zenebas Empire in ZAC 2109, brothers Hiro and Aki Isurugi used their Shadow Arm Lizards to investigate reports of clandestine Zoid research on the island of Nikaidos. They discovered the renegade scientist Zarqa and his Death Stinger ZS.

The D.A. Lizard is in all but the first game of the Saga series, making its first appearance in Zoids Legacy under the name 2-arm Lizard. Like all of the game's Blox fusions, it can be formed during battle from an existing Leoblaze and Unenlagia using Deck Commands, or it can be constructed as a standalone Zoid. The 2-arm Lizard is also a component of the Griffin, and can be used in the place of Leoblaze and Unenlagia to form "Fuzor Dragon" and Gojulox.

In Legacy, the 2-arm Lizard fusion is one of the only useful combination Deck Commands, because its components can be acquired before the player has had an opportunity to amass a large force of powerful Zoids.

The D.A. Lizard (using its full name of Double Arms Lizard) has a moderate role in the Zoids VS series, most notably Zoids Battle Legends (Zoids VS II). It can be accquired in Mission 14 of Republic Mission Mode and is used by Tita Breeze in Battle 1 of Mission Tournament Mode, alongside Shoma and the Aero Liger. 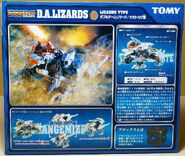 The D.A.Lizard was initially available only as a combination of the individual BZ-001 Leoblaze and BZ-002 Unenlagia kits. It was later released in a single box, recolored with white armor and red rubber sockets for both component Zoids, as well as a new sticker sheet (with red "D.A" labels replacing the components' "001" and "002" versions). It retained the same Blox and grey Republic pilots of the initial releases.

All other subsequent releases of Leoblaze and Unenlagia can also be used to form D.A. Lizards; see their respective pages for more details.

The D.A. Lizard was redecoed as Shadow Arm Lizard in early 2004 as part of the Yuji Kaida limited edition series. The kit features a matte-finish black plastic for the armor, with the other sprues recolored in dark blue-green and gunmetal. The Shadow Arm Lizards also includes the Cannondiver's weapon sprue in silver, although not all of the parts on it are used for the official build. Shadow Arm Lizard also has its own unique sticker sheet.