The Dark Horn (ダーク・ホーン) (DPZ-010) (also stylized as Darkhorn), is a Styracosaurus-type of Zoid, a race of biomechanical lifeforms from the fictional Zoids universe.

The Dark Horn is a Styracosaurus-type Zoid, affiliated with the Guylos Empire and based on the Red Horn.

The Dark Horn differs from the Red Horn in that it mounts a large Hybrid Vulcan cannon on its back. The weapon connects directly into its special power system, giving it a considerable degree of firepower. In addition, the Dark Horn retains all of the Red Horn’s existing weapons and systems.

Despite being heavier than its predecessor, the Dark Horn is just as fast as the Red Horn, possesses greater agility, and is better armored. This is due to the special materials used in its construction.

The Dark Horn is one of the “Dark” Zoids that uses a special power source, Deochalcum (likely named after the legendary metal Orichalcum). The Dark Horn's Zoid Core is bonded to this material. Found only on the Dark Continent of Nyx, Deochalcum allows it to absorb light and heat into their bodies and convert it into power for their weapons systems. As a result, while the Dark Horn is only a mid-sized Zoid, it is devastatingly powerful. All Dark Zoids give off a distinctive green glow from their power plant and other components.

Waiting inside the Bloody Gate, the only entrance to the Dark Continent, a group of Dark Horns led by Störmer attacked the Helic army’s force of Gunbluster Zoids. Despite the firepower of the Gunblusters, Störmer’s force was able to fight them to a standstill. The Dark Horn was used in other operations, proving that the design was capable of taking on even the most powerful of Helic Zoids.

The destruction of much of the Dark Continent, along with the changes to Zi during the ZAC 2056 meteor strike, destroyed the sources of the ores needed to construct and maintain the Dark Horn’s power sources. As a result, the Guylos Empire lost the ability to build the Dark Horn. To make up for this loss, they reverse-engineered the design back into the Red Horn.

As in the Zoids anime, the Guylos Empire is located on the Central Continent, rather than the Dark Continent, the Dark Horns in the anime do not appear to be anything beyond differently colored Red Horns.

The Dark Horn first appeared in Zoids: Chaotic Century, under the control of Major Karl Schubaltz. It participated in the battle of Red River, and seemed to be inherited by Marcus when Karl upgraded to his Iron Kong. Marcus then also acquires an Iron Kong; what happened to the Dark Horn after that is never explained.

A Dark Horn piloted by a mercenary named Brad (unrelated to the New Century character), would briefly appear as the very first victim of Raven's Geno Saurer.

A small force of heavily modified Dark Horns would be used for security by entrepreneur McMann, Moonbay's ex-boyfriend. These Dark Horns had gold weapons, stabilizers, and horns as opposed to grey and green like the standard kind, and possessed different armaments; a pair of special edition Gatling Rifles, and twin horns on their snouts, similar to a Rhinoceros.

Dark Horns would be stolen from the Palace security by Metlinick and his gang of thugs to try and assassinate Crown Prince Rudolph. However, Metlinick's gang would prove to be unable to accomplish their goals, and in various instances are held off by opponents with inferior equipment. They are eventually defeated when Stinger's plan goes awry, although they do succeed in getting the Imperial ring, which was at least part of their mission.

In Guardian Force, Raven would use a Dark Horn to attack a base, and performed exceptionally with it for a brief period. The Dark Horn was later replaced by a new Geno Saurer.

In addition to these Dark Horns, many anonymous examples would appear, belonging to various Imperial forces. Squadrons of Dark Horns were present at both battles against the Death Saurer.

In its initial appearance, Harry boasted about his Dark Horn's improved performance and unique armaments. He chased Bit Cloud in his Liger Zero through an abandoned city being utilized as the battlefield during Battle Mode 0973, but Bit managed to defeat Harry's Zoid by constantly turning left; the Dark Horn, never meant to turn on a dime in rapid succession and further impeded by the weight of its added equipment, bent its legs out of shape, causing Harry to crash. However, before Bit could administer the coup de grace, both the Dark Horn and the Liger Zero were shot down by a trigger-happyLeena.

Harry would use this Dark Horn several more times until it was taken away by the Backdraft group, afterwards acquiring the Iron Kong M1896 (an anime specific variant identical to the Iron Kong PK). However, Harry's Dark Horn would be seen again later - no explanation is offered if it is Harry's original Dark Horn or a new one with the same specifications.

Also in the series, a Dark Horn was used by Alteil to go and recruit the Fuma team for an unsanctioned battle against the Blitz Team. This one, like Harry's Dark Horn, is based on the McMann variant.

Several Dark Horns appeared at various points in Zoids: Fuzors. Once again, they were based on McMann's Dark Horn, with the golden parts switched back to grey. All the Red Horns in Fuzors have a glowing green power plant, similar to the Dark Horn models. 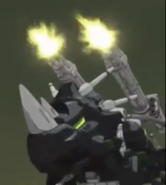 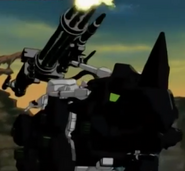 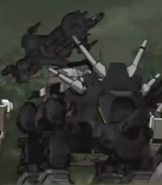 The Dark Horn was featured in one of the Empire Booster Packs for the Original Battle game of Zoids Trading Cards.

The Dark Horn kit comes on five frames (one of which is a weapons frame also shared with the Death Saurer, Dimetrodon, and Sabre Tiger), along with a battery-powered motor, two canopy covers, sixteen rubber caps, a coiled metal spring, three small chromed pilots, and label sheets. The Dark Horn is molded in black and silver, with green weapons, a silver gatling cannon, and opaque neon-green canopies and motor housing. The canopies, motor, and stickers all glow in the dark.

The frames are identical to those used for the Red Horn, with the exception of the additional frame for the Hybrid Gatling.

The Dark Horn uses a pair of “AA” sized batteries for motion. Once activated, the Zoid walks forwards, its jaws chomping while the Hybrid Vulcan’s barrels spin.

A second Dark Horn was re-released in 1998, in a limited production run. This version of the Dark Horn was nearly identical to the original, save for the motor being modified to use only a single AA battery with no loss of performance. The original and updated versions are impossible to distinguish from external appearance.

Another version of the Dark Horn was released in Japan in 2001 as a limited edition version. This version resembles the original version, but with green/blue caps and blue pilots as well as several other minor color changes. The Zoid does not glow. It has the same stickers as the Zoids (1999) Red Horn. It also has a screw-shut battery case instead of the clip of the original version. It comes in a silver box like the Black Rhimos as well as the Metal Rhimos.

The Dark Horn was released as part of the Zoids: Build Customize Mobilize line. In North America, this version was Hasbro-branded. Introduced in 2001, this version of the Dark Horn is identical to the previous Limited Edition, but lacked Hybrid Vulcan sprue. The weapons sprue was molded in silver. In other regions, the box art was TOMY-branded

A limited edition version of the Dark Horn was released in 2004 as a part of the Fuzors line, combined with Toy's Dream Project. This version is identical to the Pre-release Japanese version in color, but has a screw-shut battery case. The dark chrome pilots are replaced with dull red ones, and it has a new label sheet based on the original stickers. The motor, eyes, and stickers glow in the dark.

Despite some of the packaging artwork depicting a Dark Horn with two Gatling Cannons, along with several other design changes, the kit has no other modifications from a standard Dark Horn model.

A Legend Blox version of the Dark Horn was announced as a competition prize in December 2006. Based on the LB Redhorn, this version is recolored to match the Dark Horn's colors, and comes with an extra frame of parts for the scaled-down Hybrid Vulcan. Production is limited to 500 units.

The Dark Horn was a part of the Evo Drive line and is designated as DEZ-04. It was the last model in the line.

A HMM version of the Dark Horn was released in September 2010, with a price of 6,800 yen, re-using several aspects of the HMM Red Horn design. Unlike the previous HMM Red Horn design, this unit was recolored black, silver, and opaque neon green with green caps, and included extra frames for the Gattling Gun Unit. Kotobukiya re-released the HMM Dark Horn in August 2015.

Kotobukiya released a second Dark Horn kit modeled after Harry Champ's customized variant of the Zoid from the anime series. It includes all of the frames included with the first HMM Dark Horn. The caps and the parts frame for the Gattling Gun Unit, All-Weather 3D Radar Antennas, Horns, and two small guns were recolored to Gold. A new frame was included for Harry's customized Beam Cannon.

Unlike the previous HMM Dark Horn, Harry's Dark Horn includes a redesigned canopy piece for the fitting of a second, smaller gold horn included only with this version of the model in order to mimmick its' anime appearance.