The Deadborder (デッド・ボーダー Dead Border) is a Tarbosaurus-type of Zoid, and one of over 200 species of bio-mechanical lifeforms in TOMY's Zoids franchise.

Its most powerful weapons are its dual Gravity Cannons. These powerful weapons create and manipulate a localised, high-gravity field, which is capable of crushing almost any opponent. The Deadborder’s cannons can lift and crush a Deathsaurer, and are known to have been used to throw an Ultrasaurus. The Deadborder boasts numerous other weapons, giving it a considerable arsenal.

The Deadborder is one of the “Dark” Zoids that use a special power source. The Zoids cores are bonded to a material found only on the Dark Continent of Nyx called Deochalcum. This allows them to absorb light and heat into their bodies and convert it into power for their weapons systems. As a result, while the Deadborder is only a mid-sized Zoid, it is devastatingly powerful. The Dark Zoids give off a distinctive green glow from their power plant and other components.

Because the Zoidians native to the Dark Continent are very sensitive to bright light, the Deadborder’s cockpit is covered by a specialised shield that protects the pilot.

The Deadborder first appeared in approx ZAC 2051, when forces from the Guylos Empire attacked the Central continent. The Dark Zoid’s power sources had a detrimental effect on the environment around them, causing plants to wilt, animals to die, rivers to dry up and the very ground itself to crack. The Deadborder spearheaded the assaults, being used to attack both the Zenebas Empire and Helic Republic’s forces. A Deadborder was responsible for killing Emperor Zenebas, as well as the capture of Störmer, one of Zenebas' ace pilots who was forced into service with the Guylos Empire.

All existing Deadborders were destroyed when a meteor struck Zi in ZAC 2056. The destruction of much of the Dark Continent, along with the other changes to Zi, destroyed the sources of the ores needed for the Zoid’s power sources. As a result, no new Deadborders can be created, and the type is effectively extinct.

The Deadborder’s sole anime appearance was in Episode 21 of Zoids: Fuzors. A Deadborder (in the ‘Battle Rex’ colors) appeared briefly in the first minute of the episode, with that time including the Zoid's destruction by a Leogator and the reporting of it on a news bulletin. The Zoid had a 3D computer model, despite the fact it had never appeared on screen before and was not used again in Fuzors, or in Zoids: Genesis.

The Deadborder was featured as part of the Empire Booster Packs for the Original Battle Card Game of Zoids Trading Cards.

The Deadborder model was first released as part of the Zoids (1983) line. Introduced in 1989, production continued until 1990.

The Deadborder kit comes on four frames, along with a battery-powered motor, a semi-transparent frame, sixteen rubber caps (two different sizes), a frame of rubber tubes, a small chromed pilot, and label sheets. The Deadborder is moulded in flat black, dark grey, and neon green. The neon green frames, the motor, and the stickers all glow in the dark.

The Deadborder uses a single “AA” sized battery for motion. Once activated, the Zoid walks forwards, its arms waving and jaws chomping. The Deadborder’s back cannons can be manually positioned. No specific extra weapons were made for the Deadborder. 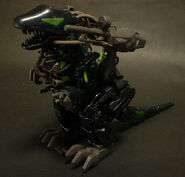 A limited run of the Deadborder was released in 1998, prior to the 1999 Zoids line. This version is identical to the original, except for the colour of the tubes, and comes in near-identical packaging.

In December 2005, Toy's Dream Project released the Deadborder as a limited edition model as a part of their line. This version of the Deadborder had a number of moulding changes, similar to those found on the Prototype Battle Rex. Additionally, the battery case now features a screw-shut cover instead of a clip-shut one. 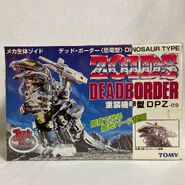 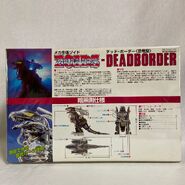 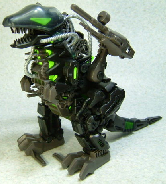