The Deantler (ディアントラー) is a type of Zoid, a race of mechanical lifeforms from the fictional Zoids universe.

The Deantler's most unique feature is its ability to control drone Chimera Blox via its Plasma Blade Antenna antlers, passing on and amplifying instructions from commanding Lord Gale. It can also fuse with Storch, passing on both the antlers and the Chimera control.

Deantler was seen as a fuzor partner to several Imperial Zoids in the Battle Story. The most notable was Storch, which used Deantler's antenna and special head. Deantler was seen again fusing with Brastle Tiger as a component of the Amarga Saurus. Aside from its fusion abilities, Deantler had an insignificant role for both the Neo-Zenebas Empire and Zi-Arms company. 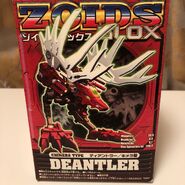 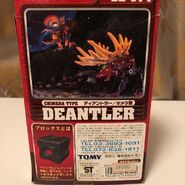 Deantler box art (back)
Add a photo to this gallery

The Deantler was released as a part of the Blox line.

An upgrade kit was released for the Deantler called the Limited Blox Parts Set E (See Zoids Customise Parts for details). This upgrade kit included the parts to build the zoids antlers, but were recolored in translucent pink.