The Death Stinger (デススティンガー, Desu Sutingā) (EZ-036) is a Sea Scorpion-Type Zoid, and one of over 200 bio-mechanical lifeforms that form the Zoid race depicted in TOMY's Zoids franchise.

The Death Stinger possesses a considerable arsenal of weapons, the greatest of which is a Charged Particle Cannon. Unlike the weapon on the Geno Saurer, the Death Stinger does not need to be immobilized in order to fire. The Zoid mounts a considerable number of other weapons, most notably a massive 930mm Double-Barreled Shock Cannon, along with numerous claws and blades (The Death Stinger has four claws, its main claws in its front, and two more additional smaller claws at its rear). All of the weapons are designed to be used both on land and water. The Death Stinger is protected by an omni-directional E-Shield, as well as very durable armour.

The Death Stinger is a Sea Scorpion-Type Zoid manufactured by the Guylos Empire.

The ultimate product of the Organoid System's technology, the Death Stinger is the combination of a powerful Zoid Core discovered in an ancient ruin and an artificially-created Organoid System. The result was one of the most powerful Zoid ever created, a machine comparable in many ways to a sea-going Death Saurer. In addition to being fully amphibious, the Zoid is capable of burrowing through even the densest rock.

The Death Stinger first appeared in ZAC 2100, developed by Guylos Regent Gunther Prozen as a counter to the Helic forces. However, once unleashed, the Zoid became rampant, attacking both the Helic and Guylos armies. The Zoid caused a considerable amount of devastation to both armies before being defeated by a Blade Liger and a Geno Breaker. Both Zoids were destroyed despite the victory, with the Geno Breaker pilot being the only survivor.

Despite this, the Death Stinger was later employed by the Guylos Empire in the defense of the Dark Continent of Nyx (in the form of Death Stinger KFD or Killer From the Dark, a camouflage-coloured variant that sacrificed power for better control - i.e. not going berserk), and later by the Neo-Zenebas Empire in their invasion of the Republic (as the Stealth Stinger, a black model with the Particle Cannon replaced with a pincer). The entire KFD group was defeated by the Liger Zeroes of the new Ray Division, while the Stealth Stinger was caught off guard by the speed of the Gojulas Giga and destroyed.

The Death Stinger also possesses some unusual abilities. The Death Stinger has the capability to operate completely unmanned for extended periods of time, controlled by the Organoid System itself. It can also create copies of itself, apparently by altering the Cores of Zoids it had destroyed. There is also a special version of the Death Stinger created during the Neo-Zenebas regime called the Zarka Special (or ZS for short). Wanting his research to become more widely known, an independent scientist named Zarka added a limiter to the Zoid Core to make it controllable without taking away too much power, and planned to unleash it on the Central Continent.

The Death Stinger is used heavily by Hiltz during the second half of the Zoids: Guardian Force series. The Death Stinger was created by merging the Zoid Cores of the two Scorpion-Type Zoids responsible for defeating the Death Saurer.

Hiltz used the Death Stinger to launch a campaign of terror against the Republic and the Empire, completely annihilating several civilian populations, including New Helic City.

The Death Stinger was eventually defeated, initially due to the immense power of the Gravity Cannon, but later by the Guardian Force. It is constantly revived, both by Ambient and the Zoid Eve, but its Zoid Core is eventually fused with Hiltz and the Core of the Death Saurer revived by Prozen four years earlier. This combined Zoid Core then merged with the body of the Death Saurer, reawakening it as its true form.

Like the Death Saurer, the Death Stinger was depicted many times larger than its model scale would indicate, albeit inconsistently. At its largest, the anime Zoid was able to pick up a Blade Liger, Lightning Saix, Command Wolf or a Dark Horn in its claws.

In Zoids: New Century, the Backdraft Group possessed the tail and Charged Particle Cannon of the Death Stinger from Guardian Force. It was mounted onto a platform at the top floor of the Backdraft's headquarters. The Backdraft used the tail's Charged Particle Cannon to shoot down the Judge Satellites from the sky in episode 24-25 as part of their coup d'etat against the Zoid Battle Commission during the Royal Cup. The scene where it was deployed re-used the original animation model from Guardian Force. No specifics relating to this weapon (such as its history) are given - it is not even referred to as a Death Stinger's tail, instead simply being referred to as a standard Charged Particle Cannon.

The Death Stinger appears in the Chaotic Century manga, piloted by Lieutenant Hanna Hanna of the Prozen Knights. Hanna was under orders from Prozen to start a war against the Republic by exploiting tensions surrounding the border town of Mule. Her Death Stinger's first appearance was against Van's Blade Liger. Although she was able to dominate the Blade Liger, she had ultimately failed in achieving her goal. Her attack on Van was unprovoked, meaning she failed to trick the Republic into launching the first strike. The Death Stinger retreated after Herman's S4 appeared and began recording her one-way acts of aggression.

The Death Stinger is equipped with the "Berserker System", which sends combat data directly to the mind of the pilot. Only pilots implanted with special genetic material can handle the mental strain. When Hartriegel attempted to pilot the Zoid, the overwhelming data caused her to revert to her animal instincts, resulting in the Death Stinger going berserk.

The rampage of the Death Stinger was only stopped when the Zoid Core of Caesar (Van's Zoid), was transplanted into the chassis of a prototype Liger Zero, then empowered by the ancient Zoid Oluga.

The Death Stinger made an appearance in several video games, including both the Zoids Saga series and the Zoids VS series. In Zoids Legacy a new stronger variant was available, called the Jagd Stinger, which is notably armed with two Charged Particle Cannons on its tail instead of one, and has a differently designed head and claws. No parts are required to upgrade Death Stinger into Jagd Stinger, and no major characters are seen in one.

In Zoids Saga I, another upgraded version of the Death Stinger appears. The Death Stinger OS, piloted by an enemy scientist named "Ops", is a variation that sports a much larger-bored Charged Particle Gun on the end of its tail, as well as a customized color scheme (notable to most of the pilot's customized Zoids).

The Death Stinger appeared in the Original Battle Game and Zoids Card Colosseum collections of Zoids Trading Cards. The Death Stinger KFD was featured in the Zoids Scramble release with a yellow and black color scheme, and in the Zoids Battle Card Game (Imperial Booster Set 4). In the Battle Card Game, it features the same yellow and black color scheme, but has two large cannons in place of the back pincers. 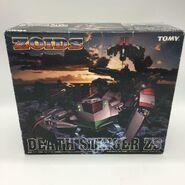 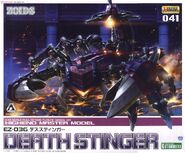 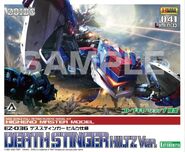 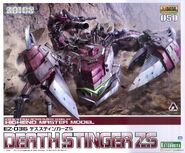 The Death Stinger was released as part of the Zoids (1999) line.

The Death Stinger kit comes on six frames, along with a battery-powered motor with light, a clear frame, thirty-two rubber caps, a small blue pilot figure, and a label sheet. The Death Stinger is molded in blue, red and bronze with silver blades, clear red eyes and some painted red and silver details. The Zoid's design and mechanisms are based on the 1/24th scale Deathpion Zoid, even if the two kits don't share any parts.

The Death Stinger uses a pair of “AA”-sized batteries for motion. Once activated, the Zoid walks forwards, its pincers and claws snapping. The Death Stinger's eyes also flash on and off. The tail can be manually positioned.

The Death Stinger was released as part of the Zoids: Build Customize Mobilize line. The only changes made to the kit were to the box art. The American release was Hasbro-branded.

A toy version of the Death Stinger ZS (Zarka Special) was released as the 13th model of the 'Yuji Kaida' limited series in 2004.

No physical changes to the model were made, although it was repainted. Parts of the grey structure have been replaced with maroon, while the armor is now silver and maroon. The silver parts on the original have been replaced with lavender ones. The translucent cockpit parts are now green. The sticker sheet was redesigned; replacing Guylos for Neo-Zenebas, and including several custom stickers.