The Demonshead (デモンズヘッド) is a Chimera type of Zoid, a race of mechanical lifeforms from the fictional Zoids universe. One of over 200 species of biomechanical life forms that provide the basis for TOMY’s model kit, anime, and comic-based Zoids franchise.

In Zoids VS II, a weapon for the Rev Raptor can be bought made from Demonshead parts, called the Demons Cannon. 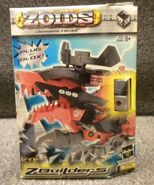 An upgrade kit was released for this zoid known as Limited Blox Parts Set B. (See Zoids Customise Parts for details) It included the Demonshead horns, but they were recolored translucent red.

The Demonshead was released as a part of Hasbro's Z-Builders line in the United States. It is mostly identical to the Blox version.