The Dibison (RZ-031 ディバイソン) is a Bison-type of Zoid, and is one of over 200 species of bio-mechanical lifeforms that form the Zoid race depicted in TOMY's Zoids.

The Dibison is has one of the heaviest weapon loadouts ever seen on a Zoid. The Dibison's principal weapons are an array of seventeen 105mm mortars mounted on its back. Long-ranged and capable of indirect fire, the weapons can be used to saturate an area or focus on a single target.

Additionally, the Dibison's super-heavy Crusher Horns are one of only a few weapons capable of penetrating thick armor, and its Crusher Hooves can be used to trample enemy Zoids underfoot. While not very agile, its speed and mass allow it to effectively charge down enemy Zoids. The Dibison's armor is very thick, allowing it to wade through enemy fire. Finally, the Zoid is fitted with an extensive sensory system, allowing it to detect and engage enemy Zoids at long range.

The Dibison was developed by the Helic Republic during the ZAC 2040s as a counter to the Zenebas Death Saurer, and to be used in reclaiming the Republic's capital. Alongside the newly developed Madthunder, Arosaurer and Raynos, the force succeeded in retaking the capital and defeating the Death Saurers there, a feat that no Zoid had yet achieved.

The Dibison remained an integral part of the Republican army, being used to spearhead assaults on the Empire's troops. its design was so successful that a smaller-scale derivative, the Cannonfort, was developed from it.

The design appears to have been retired following the ZAC 2056 meteor disaster, possibly due to the destruction of all the extant Death Saurers. Instead, the rebuilt Republic army used the older Gojulas and Gordos as their heavy Zoids. This changed, however, with the reintroduction of the Death Saurer in ZAC 2100. In response to this development, the Republic began to produce new Dibisons to counter it.

The Dibison's first appearance is in the Guardian Force episode "The Steel Bison", where it is piloted by Lt. Thomas Richard Schubaltz, the younger brother of Col. Karl Lichen Schubaltz. Despite it being a Republican Zoid, Thomas is a member of the Imperial army; Thomas came into possession of the Dibison as a result of the technology exchange between the Guylos Empire and the Helic Republic after the war. Van Flyheight was placed under his command and the two of them investigate and defeat a gang of bandits. Thomas becomes smitten by Fiona and acts haughty and antagonistic towards Van early on out of jealousy. However, he eventually grows to respect Van and the two pilots become friends.

The Dibison appears in nearly every Guardian Force episode after that - probably the most notable episode featuring the Dibison is The Devil's Maze, where Thomas was forced to fight his own brother and his Iron Kong while the latter is under the mind control of Rease. The Dibison would not be seen during the final episodes of the series due to being disabled by the Death Stinger, and would not participate in the final battle against the Death Saurer.

Thomas' Dibison is augmented by a special AI system called "BEEK". Designed by Thomas himself, Thomas compares its performance to that of an Organoid. BEEK is capable of uncovering an opponent's weaknesses and exploiting them, among other abilities, (such as tracking stealth Zoids by footprints and gunfire). He communicates to Thomas via robotic beeps, whistles, and warbles, similar to those made by R2-D2 of Star Wars fame. BEEK is integrated into the combat system of the Dibison, but can also be carried portably by Thomas via a multipurpose device that also serves as the Dibison's steering wheel. Thomas boasts that his BEEK AI system is superior to a real Organoid.

Despite being a high-performance Zoid (was stated to have the power of 3 Zoids), the Dibison was only moderately effective. While it was more than capable at taking on normal enemies, when pitted against good pilots, such as Irvine and Raven, Thomas' Dibison would be regularly defeated. This was partially on account of his over-reliance on BEEK, but was exaggerated by the simple fact that the Dibison was much less agile than his teammates' Zoids.

A Dibison would be piloted by Leena Toros of the Blitz team in the early episodes, accompanying Brad's Command Wolf and Leon's Shield Liger (and later, Bit's Liger Zero) in battle. Like Thomas's Dibison before her, Leena's Dibison was often easily defeated, and may once again be attributed to piloting skill, as even when she upgraded to her Gun Sniper, she was regularly the member of the Blitz team who was defeated first. The Dibison would briefly be piloted by Jamie as well when Leena was kidnapped in episode 4.

While Jamie would offer Bit with intelligence support, mimicking the role BEEK fulfilled in Guardian Force, he would be easily taken out by the Backdraft's illicit maneuvers. Leenas's Dibison can be distinguished from other Dibison featured in the series, as hers is yellowish in hue, while the others (including Thomas's) are green. Its most noteworthy appearance was in episode three, where Leena's Dibison was able to score all the points in the battle. Incidentally, this is the only time when the "Megalomax" attack is used (though it is not named as such). In the one time this attack is fired on-screen, it can be seen that only the middle 9 guns of the Dibison are used, while Thomas' appeared to use all 17, and the lock-on screen shows her targeting with all 17 guns (and is therefore presumably an animation oversight).

Eventually, Leena's Dibison would be the first victim of the Elephander in episode 6, "The Dark Giant: The Invincible Elephander", where it would be destroyed by a single shot from its 60 mm Hyper Laser Gun. The Dibison's remains would be sold off for scrap and traded for Leena's new Zoid, the Gun Sniper LS.

Also of note is that Leena's Dibison has the same multipurpose steering unit as Thomas', although it is not stated that hers has a BEEK AI as well.

A few other Dibisons also appeared in minor roles. Harry Champ's sister Mary had a small herd of Dibison; these were not used for battle, but instead merely to drag her caravan.

A trio of Dibison were also used by a cannonfodder team simply called the "Buffalo Team". They appeared briefly to fight Doctor Laon's Neo Warsharks; unable to breach the Fuma team's powerful E-shields, they were each effortlessly destroyed with a single shot.

A single wrecked Dibison would also be seen during the Royal Cup, having been destroyed off-screen by the Berserk Fury.

A persona of Thomas's Dibison being defeated. 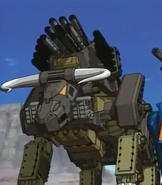 A lone Dibison named Gungho appears in the Chaotic Century manga and is piloted by Lieutenant Paris of the Republic. Gungho was previously piloted by Colonel Rob Herman and could take on a Sabre Tiger when Colonel Herman was the pilot.

The Dibison appears in the New Century manga, as Leena's initial Zoid. However, it is never used in combat. During the first chapter, it is piloted by Jamie to rescue Leena from Team Mord (while Bit and Brad buy time in the battle). It is sabotaged prior to the battle against the Elephander in the second chapter. By the time the third chapter comes around, Leena has her Gun Sniper. This is somewhat of a plot hole, considering the Dibison was not totalled against the Elephander. There is no explanation about the Zoid, or the Gun Sniper.

The Dibison was featured in both the Zoids Saga and Zoids VS series of games. An upgraded version, called Gravity Bison appeared in Zoids Saga.

Dibison from Zoids Assault
Add a photo to this gallery

The Dibison was featured in several of the Zoids Trading Cards releases, including the Original Battle Game, Trading Collection Cards, and Card Colosseum.

Mini Dibison
Add a photo to this gallery

The Dibison kit comes on five frames, along with a battery-powered motor, a semi-transparent canopy cover, sixteen rubber caps, two small chromed pilots and label sheets. The Dibison's hooves and horns are made from metal, rather than plastic. The Dibison is moulded in black and green, with silver weapons, and orange canopies.

The Dibison uses a pair of “AA” sized batteries for motion. Once activated, the Zoid walks forwards while raising and lowering its head. The weapons on its back can be manually raised or lowered, and the back can be opened to reveal a radar antenna.

The Dibison could use a number of different optional weapons that were included in the Republic Customise Set.

The Dibison was released as a part of the Zoids (1999) line. Introduced in 2000, Dibison's colour scheme was similar to the originals, with the green trim being noticeably darker. The motor was changed to work off a single AA battery with no loss of performance. The battery lid was also modified to have a screw-down cover, rather than the clip-down one of the original.

The Dibison was released with the first wave of Gachapon minis.

The Dibison was released as part of the Zoids: Build Customize Mobilize line. Introduced in 2001. This version of the Dibison is identical to the Zoids (1999) version, except the metal horns and hooves were substituted with plastic equivalents and different packaging. The American release was Hasbro-branded, while the international version was TOMY-branded.

December 2012 saw the release of the HMM RZ-031 Dibison Thoma Ver. This kit came with a Thomas figure from the Guardian Force anime as a pilot figure. The kit retailed for 9,800 yen, and was 036 in the line. Kotobukiya will reissue the RZ-031 Dibison Thoma Ver. in July 2020 as the RBOZ-006 Dibison Marking Plus Ver. The kit retailed for 9,800 yen, and came with a normal pilot figure, a water slide sticker sheet, and bonus clear parts. It also uses a different shade of silver for the teeth, hooves, and horns.