The Dimetra Ptera is a Dimetrodon or Pteranodon-type Zoid, a race of mechanical lifeforms from the fictional Zoids universe. It is also known as Dimetroptera (ディメトロプテラ, Dimetoroputera).

One of a select few Zoids capable of converting between two entirely different forms, the Dimetra Ptera is a Helic Republic Blox Zoid constructed around the TB8 core. Its two forms are perhaps more than any other Zoid devoted to wholly different functions. In Pteranodon form, the Dimetra Ptera is a high-speed aerial combat Zoid capable of both air-to-air and air-to-ground operations. In Dimetrodon mode, it serves much the same role as Zenebas Dimetrodon-type Zoids, with sophisticated communications and electronics warfare gear. Its weapons in this form are mounted entirely in rear-facing defensive positions, and it can even carry a dedicated gunner in a seat behind its "sail."

Like all Blox Zoids, the Dimetra Ptera is capable of merging with other Zoids to create larger and more powerful forms. Notable are its fusion with Fire Phoenix to form Ptera Phoenix, with Dispelow to form the heavily-armed Cannoneer Dimetro, and with both Evoflyer and Jet Falcon to form Rapid Falcon.

The Zoid served as a versatile unit for the Helic Republic. In its first form, the Dimetro Ptera specialized in electronic warfare and was used effectively to jam radars and close communications lines. It also gained a fearsome reputation as a long-range sniper unit. The Dimetra Ptera contributed to the capture of a Neo-Zenebas base on Mount Arthur in ZAC 2109, and this base was then used as an airbase for the Zoids' Pteranodon form. The Dimetra Ptera served as the primary Republic air force unit for some time.

As the Neo-Zenebas Empire established superiority in electronic warfare, the Republic redeployed the Dimetra Ptera as a land unit. Although it was insufficient to turn the tide entirely in the Republic's favor, it again served reliably in both electronic countermeasures and sniper roles. Republic forces continued to field the Dimetra Ptera until the deployment of the Seismosaurus. Although the Dimetra Ptera could reduce the effective range of the Seismosaurus' Focused Charged Particle Cannon, they were incapable of completely defeating it, and the massive Imperial Zoid wiped out many Republic units. The majority of the remaining Dimetra Pteras were destroyed when Imperial forces overran their airbase. After these setbacks, the design (along with the Leo Gator) was taken out of production, with the Republic concluding that the costs of transforming Zoids (and their TB8 cores) were prohibitive.

Many of the remaining Dimetra Pteras were used as escorts for the Jet Falcons sent in to support Ray Gregg and his Liger Zero unit in their desperate strike at Wolff Muroa's Energy Liger at the end of the war.

The Dimetra Ptera was piloted by Rebecca, who used its electronic broadcasting abilities to brainwash Luke while he piloted a Leo Gator. Despite being defeated in combat multiple times, it was never captured. Thanks to its shape-changing ability, it was also accepted by the resistance that had sprung up to oppose Alpha Richter, which allowed Rebecca to sabotage the group from the inside. Just before the final battle, it was ultimately destroyed by Blake's Gairyuki, though Rebecca survived.

The Dimetroptera made an appearance in the later games of the Zoids Saga series. 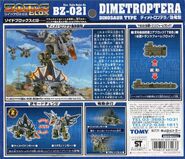 The Dimetroptera was first released as part of the Blox line. It is made up of three sprues in blues and greys, as well as a single silver Core Blox, and is largely constructed around a "transformable" preassembled motor unit. It also includes a standard grey Republic pilot, despite seating two. It could be built in either of two forms; both forms used all of the model's parts.

The motor runs on one AAA battery and was shared with Brachio Zilla and Leo Gator. 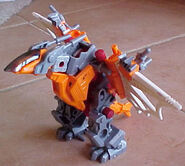