The Dispelow (ディスペロウ) is a buffalo type of Zoid from the fictional Zoids universe. One of over 200 species of biomechanical life forms that provide the basis for TOMY’s model kit, anime, and comic based Zoids franchise.

The Dispelow is classified as a Fuzor, as it is capable of combining with the Gairyuki, to form the Gairyuki Destroy. It has three forms referred to as Normal Mode, Shooting Mode, and Ultimate Mode (see gallery below for the latter modes).

The Dispelow appeared in Zoids: Fuzors, alongside the other Gairyuki Fuzor partner, Evo Flyer. Both Zoids are wild, and were first encountered terrorizing convoys heading towards Blue City. During Mach Storm's failed attempt to capture or disable the two wild Zoids, both of Dispelow's modes are depicted.

The Dispelow is revealed to be a Fuzor partner in episode 20, where it initially attacks Blake and his Gairyuki. The Dispelow proves to be a match for Blake's Zoid, and with the Evo Flyer it fights well against him. However, after defeating the Gairyuki's remote AI units, Blake defeats the Dispelow by hurling it into the Evo Flyer. When he approaches the defeated Zoids, they get back up to reveal they are in fact fuzor partners with the Gairyuki. Fused with the Dispelow, the Gairyuki manages to withstand a constant barrage from 9 Iron Kongs without taking any damage or deploying his energy shield. Like many of the Zoids in Fuzors, the Fused Gairyuki is called incorrectly the Gairyuki Destroy and even Gairyuki Attack.

Due to the positioning of the Zoid's horns, many scenes in Fuzors had the CGI animation of the Dispelow depicting the Zoid's cannons passing right through those horns.

The Dispelow appears as a weapon in Zoids VS III, which can be used with the Gairyuki and Gairyuki Destroy. It also appears in the Zoids Saga series, from Fuzors onwards. 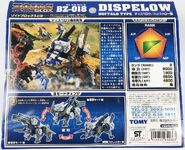 The Dispelow was fist released as a part of the Blox line, colored blue and white.

An upgrade kit was released for the Zoid known as the Limited Blox Parts Set H. It included the parts to build the Dispelow's guns, but recolored translucent brownish grey.