The Double Sworder (ダブルソーダ) is a type of Zoid, a race of mechanical lifeforms from the fictional Zoids universe.

The Double Sworder is a Stag Beetle type Zoid, that can make characteristic clicking noises by rubbing the two teeth-like "Swords" together.

This Zoid predominantly features in Guardian Force, where it is used by Rease to mind control citizens. Extremely small versions of the Double Sworder are seen wherever Rease goes. These small Zoids are approximately the size of an actual Double Sworder model. Rease has also piloted a full size Double Sworder, as well as a giant one that Specula fused with, making it even larger then the Blade Liger.

This Zoid also appeared in Zoids: Fuzors, where it is used to help hijack a Whale King. The Zoid was disassembled and put back together inside the Whale King, where it was able to successfully take the passengers hostage.

A Double-Sworder plays a minor role in Zoids: Genesis, where it is part of a gang of thieves who try to steal Ruuji's Liger. 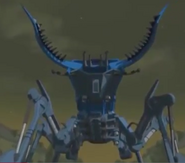 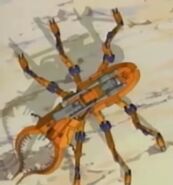 The Double Sworder was featured in three out of the four Zoids Trading Cards releases; all but the Zoids Card Colosseum.

The Double Sworder (RMZ-30) was first released as part of the Zoids (1983) line. It is light blue and has 6 navy blue to gray legs. It also has a clear orange canopy. Unlike most Zoids, it holds two pilots. The kit comes with 2 standard gold chrome pilots. It has a wind up motor to allow the Zoid to move in a forward direction.

The Double Sworder was released as a part of the Zoids (1999) line. There were no physical changes to the model (other than packaging). It is colored dark blue and light gray. It included 2 standard dark gray pilots. This model is similar to the Double Sworder seen in Zoids Guardian Force used by Rease.

Hasbro planned to release a Holotech version of this Zoid, where all the blue parts were translucent blue. Only one item was spotted, in a private collection.