The Elepantus (エレファンタス ) is a type of Zoid, a race of biomechanical lifeforms from the fictional Zoids universe.

The Elepantus was one of the first large-scale Zoids deployed by any force on Zi.

The Elepantus is an ancient Zoid, first deployed in about ZAC 1930 along other early Zoids like the Garius and Glidoler.

The Elepantus was created by placing the core of a “wild” Zoid into a completely artificial mechanical body, one that was far larger than its original form had been. Like the other early Zoids, the Elepantus was an "experimental" design, seen more as being a prototype than a true Zoid. Nonetheless, it was considered to be combat effective.

The early Zoids essentially changed the face of warfare on Zi; until that point, armies mainly consisted of Infantry, or Cavalry riding on wild Zoids. The Elepantus was used by the Helic Republic to great success; however it proved to be outclassed by the first generation of Zenebas Zoids.

The arrival of Humans on Zi in ZAC 2029 spelt the end for the Elepantus. The introduction of human technology rendered the Elepantus obsolete and it was largely replaced with newer Zoids by the mid ZAC 2030s.

While often outperformed by their Red Mutant rivals, Protozoids were still used as the frontline soldiers of the Blue Zoid army. The Protozids were considered obsolete, however, and their numbers were being slowly depleted by attrition. The bulk of the extant Protozoids were destroyed while fighting the Black Zoid. Afterwards, the Blue Zoids began production of new Zoids to replace them. 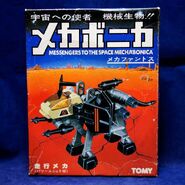 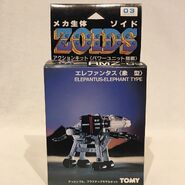 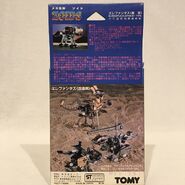 The Elepantus was initially released in 1981 as part of the Mechabonica line.

The Elepantus kit comes on three frames (one of which was re-used by the Hidocker and Gorgodos), along with a small wind-up motor, cockpit, canopy cover, six rubber caps, a small chromed pilot and label sheets. The Elepantus is moulded in grey, black, and white. The head was shared with a number of other early Zoids like the Glidoler and Garius.

The Zoid uses a simple wind-up motor for its motion; once wound, the Zoid will walk forwards and flap its ears. The head can be manually positioned.

The Elepantus can be equipped with the optional weapons and equipment released in the Zoids Remodeling Set.

The Elepantus was discontinued in 1985.

The Elepantus was released as part of the Zoids: The Pre-Hysterical Monster-Machines line. This version was unnamed.

The Elepantus was released in Europe as part of the Spider-Man and Zoids line. It had the name Protozoid. There were no changes to the model.

The Elepantus was released in 2006 by Toy's Dream Project, in a boxed set along with the Garius, Glidoler, Aquadon, and Gargantulus. There were no changes to the model itself.