The Energy Liger (EZ-072 エナジーライガー) is a Lion-type of Zoid, and is one of over 200 species of biomechanical lifeforms that form the Zoid race depicted in TOMY's Zoids Franchise.

The Energy Liger was first released in 2003. The Energy Liger also appears in the Zoids: Fuzors anime, and features in New Battle Story, as a Zoid of Emperor Wolff Muroa.

The Energy Liger’s primary weapons, a twin-barrelled beam cannon and an eight-barrelled Gatling gun, are both powered by the Energy Charger. As a result, the weapons are very powerful and deal tremendous damage. The Energy Liger has a pair of wings, also powered by the Energy Charger, that provide the Zoid with limited flight capability, along with the ability to cut through its opponents.

The Zoid plays a significant role in the late Battle Story, notably towards the conclusion of the New Battle Story as the personal Zoid of Neo-Zenebas Emperor Wolff Muroa.

The Energy Liger is a Lion-type Zoid, created by the Neo Zenebas Empire. It was developed from the same wild Zoid type as the Liger Zero.

The Energy Liger's origins lie in the Liger Zero X used by the Neo Zenebas Empire during their coup in ZAC 2101. Based on the technology from the Zero X, the Energy Liger improved upon the earlier Zoid in every way. The Energy Liger first appeared in ZAC 2108, being used by the Neo Zenebas Empire to help protect the Seismosaurus against the Gairyuki and Liger Zero Phoenix. In combat, the Zoid proved to be superior to its predecessor; the sudden unexpected appearance of the Energy Liger while the Republic is attempting to conquer the Empire's Chimera City resulted in the decimation of the Helic forces. However, the Empire left the Republic to control of the city, but leaving them fearful and speechless with the outstanding performance of the Energy Liger.

A year later in ZAC 2109, the Helic Republic attempted to retake their capital from the Neo Zenebas forces. Wolff Muroa led the counter attack from his own Energy Liger, which had been modified to have a higher engine output than a normal example of the Zoid. Again, the Energy Ligers proved to be superior to the Republic's Liger Zeroes, decimating the Helic forces and preventing the Gairyuki units from destroying the Seismosaurus. Only the arrival of the Jet Falcon (ironically originally designed as a Fuzor partner for the Energy Liger) allowed the Republic to salvage their assault. The Liger Zero Falcon has become as fast and as powerful as the Energy Liger, or easy to say an equal to it.

During the battle, the Republican hero Ray Gregg and his Liger Zero Falcon, fought against his long-time rival, Wolff Muroa, and his Energy Liger. Unfortunately, the Energy charger on Wolff's modified Zoid has been badly damaged. The Liger itself has gone berserk that even the emperor can't control his own Zoid until it stops. Wolff then advised everybody to leave because it might explode anytime soon, wiping out everyone in the city. The two rivals then helped each other to link up the Energy Liger with the Zero Falcon and siphon off the excess energy.

The Energy Liger appeared solely in the Zoids: Fuzors anime, first appearing in episode 13, during a battle between Mach Storm and Savage Hammer. The Energy Liger effortlessly destroyed Savage Hammer’s Buster Fury and Matrix Dragon without warning, and damaged Liger Zero Phoenix before running off. Nobody could identify the Zoid, but RD believed that the Energy Liger was the legendary Alpha Zoid. The Zoid is not named as the "Energy Liger" until episode 14.

The Energy Liger appeared several more times, saving RD on several occasions, while launching seemingly random attacks at other times. Each time, the Zoid ran off, disappearing just as abruptly as it appeared. The Energy Liger was revealed to be remotely controlled by Dr Pierce who pilots the Ray Kong. In episode 24, the Energy Liger is shown to fuse with the Ray Kong to form the Energy Ray Liger. It is here that Pierce reveals that he wants, the Liger Zero "Out of the picture", which apparently contradict the Energy Liger having saved RD mere moments before the fight. In this battle, the Energy Liger, while successful in totalling Blake's Evo Flyer, was knocked out and deactivated by RD's Liger Zero Falcon.

Due to the awkward wording used by Dr. Pierce, the origins of the Energy Liger are unclear. It was part of Alpha Richter's scheme to develop the ultimate Zoid, and was studied alongside the Gairyuki and the Seismosaurus, although only the latter would be employed by Alpha. It is for this rejection that Dr. Pierce rebelled against Alpha. However, the unclear aspect is whether or not Dr. Pierce actually built the Energy Liger, or just installed some kind of system-enhancing device onto it that allowed him to control it.

Either way, it was developed by studying the Liger Zero, whose data was gathered from Zoid battles, which Dr. Pierce had arranged throughout the series. The Ray Kong's involvement is also ambiguous. Pierce refers to it as having a "sub-control system" for the liger, and he pilots it alongside the Energy Liger. This was apparently to fix a "flaw" that Alpha found with the Zoid. However, this isn't explained in sufficient detail to fill in the gaps with Pierce's explanation.

The opening animation from the English language version of Fuzors from episode 20 onwards depicts a sequence of the Energy Liger running alongside the Liger Zero Falcon, its energy charger connecting to the Falcon’s body. A brief section of text in this same episode also alludes to this ability. Despite this, the scene never actually occurred in either the Japanese or English versions of Fuzors.

The Energy Liger appeared in Zoids Saga, Zoids VS, and Zoids Infinity series of video games. As for the Zoids Saga series, it was featured only in Zoids Saga III and Saga DS. It appeared through a special combination of sounds under the 'Sound Test' menu in Zoids VS II (Zoids Battle Legends), and as a normally unlockable Zoid in Zoids VS III.

The Energy Liger was featured in two of the Zoids Trading Cards releases: Zoids Scramble and Zoids Card Colosseum.

The Energy Liger was released as a part of the Zoids (1999) line. It was introduced in December 2003, and remained in production during 2004.

The Zoid uses a pair of “AA” batteries to power its motion. Normally when the Zoid is motorised, it walks forwards at a reasonable pace. Additionally, the two bellows pump, supplying air to the Zoids other systems.

While no specific upgrade kits were released for the Energy Liger, the Zoid could be combined with the Scissorstorm and Laserstorm Blox Zoids, as well as Styluarmor, Raykong (Gorilla Tron) and Jet Falcon Blox Zoids, to create the Energy Storm, Stylu Energy, Energy Ray, and Energy Falcon respectively, with pictures for the Storm and Stylu fusions found in the manual. 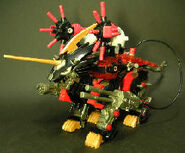 As part of the Zoids: Build Customize Mobilize line, Hasbro released its own version of the Energy Liger in December 2003, a few days prior to the Japanese release. This version is moulded in different colours, being black, red, silver, gold, and clear orange. Additionally, it uses a different colour and style of rubber cap. This version of the Energy Liger lacks the stand and connection adaptors, but is otherwise identical to the Japanese version in design.

This version is designated as a Guylos Zoid, and has Guylos insignia stickers included. It also bore the designation number "EZ-102".

The box of the Hasbro Energy Liger does not exactly depict the model. Instead the images are of a prototype, with a number of differences in mould to the finished model.

The Energy Liger did not see release in Australia or the Pacific region.

Another version of the Energy Liger was released in Japan in late 2004 as a part of the Fuzors line. This version, whose designation number is FZ-015, of the Energy Liger is identical in colour to the NAR version, but has all the parts of the NJR version. Additionally, it comes with an extra frame of connectors that allow it to combine with the Jet Falcon and Gorilla Tron' to become the Energy Falcon or Energy Ray Liger, respectively.