This article is about the Zoid in the Zoids: Wild line, known as "Fangtiger" in Japan. For the Zoid that features in Zoids: Chaotic Century, see: Zaber Fang

The Fang Tiger (ファングタイガー, Fangu Taigā) is a Smilodon-Type Zoid, one of over 200 species of biomechanical lifeforms depicted by TOMY's Zoids model, toy, and media franchise.

The Fang Tiger is a medium Zoid with an open-air cockpit. Compared to other Zoids in the Zoids: Wild series, it is an M-sized Zoid.

In Zoids Wild, the Fang Tiger is known as: Zaber Fang.

The Zaber Fang is piloted by Quade, the leader of Team Supreme. It is an exceptionally powerful, and rare Zoid. It is one of the only Zoids able to go beyond a Wild Blast and perform a limit-broken version of the technique. This was used against Gigaboss in episode 13, and badly damaged the Zoid.

After the defeat in Episode 13, the Zoid isn't seen again until towards the series finale. It reappears when Team Freedom and Team Supreme are engaged against the Four Dark Warriors of the Dark Metal Empire. The Zaber Fang's combat skills are able to sway the battle.

Even later, the Zoid's roar manages break the Dimepulsar's sway on several of Supreme's Zoids, allowing them to fight back against Dark Metal.

Red Fang Tigers are seen in the intro scene as part of the "Zoid Crisis" that predates the start of the series. Much later a black variant is introduced, the Fang Tiger Kai. 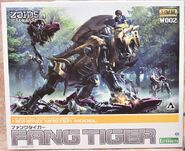 The Fang Tiger was released as part of the Zoids: Wild (Models) line.