The Gairyuki (ガイリュウキ, Gairyūki) is a Tyrannosaurus-type Zoid and one of over 200 species of bio-mechanical lifeforms that form the Zoid race depicted in TOMY's Zoids franchise.

The Gairyuki sports a unique Ray-Absorbing Charged Particle Cannon. Instead of relying on intake vents to collect and energize the vast amount of particles needed to power the Charged Particle Cannon, the Gairyuki used a system of twelve 'ray-absorbing panels' positioned across the body of the Zoid. These were capable of collecting and storing the energy from enemy beam weapons, which would then be used to power the CPC. In extreme circumstances, these panels could be used to collect energy from sunlight[citation needed], although the charging process would take longer to complete.

Another innovation of the Gairyuki project was the development of the 'Blox Changing Armour System'[citation needed]. The armour of the Gairyuki was made up of the components of two unmanned Blox Zoids, which could separate and operate independently of the Gairyuki.

If the Gairyuki Shin uses all three Support Blox at the same time, only one ray absorbing panel remains, and it leaves the Zoid extremely vulnerable to attack.

In addition to the Support Blox, the Gairyuki is capable of combining with additional Blox Zoids to increase its capabilities. Two Fuzor Zoid combinations are known. 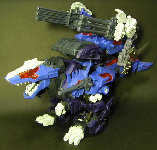 The Gairyuki's package also depicts it with the Buster Eagle's cannons. However, this combination makes use of no other parts from the Eagle.

The Gairyuki is the successor of the Berserk Fury, created after the Helic Republic's army was wiped out by the Neo-Zenebas Empire. The events that caused the retreat of the Helic Republic to the Eastern Continent resulted in the greatest collaborative event yet seen on Zi.

The Gairyuki is the end result of the co-operation of three major factions:

Following the fall of New Helic City in ZAC 2106 and the complete defeat of the Helic Republic by the Neo-Zenebas Empire and their Seismosauruses, the remnants of the Republic fled to the Eastern Continent. Upon the survivors' arrival on the continent, they were met by representatives of the ZOITEC Corporation, along with the remnants of the Guylos Empire.

ZOITEC was the primary producer of Zoids on the Eastern Continent, but the corporation's manufacturing ability was limited to the small-scale Blox Zoids. The Helic Republic offered ZOITEC the resources and technology to develop larger Zoids; in return ZOITEC was to rebuild the Helic Republic's military forces. In particular, the Republic wanted Zoids that could stand up to the Seismosaurus units that had routed them in the previous year. The Guylos Empire, seeking peace with the Republic, offered to contribute, providing the Wild Zoid that was used as the basis of the Berserk Fury.

The result of this combined effort was the Gairyuki. The Blox Zoids ZOITEC were skilled in producing were adapted to serve as combined armour and support units for the Zoid; the Blox-CAS adaptation so successful that it was used to upgrade the Republic's surviving Liger Zeros on two occasions. Helic Republic's recently developed Ray-Absorbing Vernier system was integrated into the Zoid's armour, and was used to power the Zoid's upgraded Charged Particle Cannon, providing the needed punch against the Neo-Zenebas Empire.

Because of the role the Zoid was predicted to play in the Helic Republic's return to the Central Continent, the new Zoid type was named 凱龍輝 Gairyuki, which means Shining Victory Dragon. Its Japanese name is explained that the head engineer who design it is a descendant of Japanese Earthling on board the Globally III.

The Gairyuki was deployed en-masse during the Republic counter-invasion in ZAC 2109, supported by groups of Liger Zero Phoenixes. The Gairyuki units served with distinction until the end of hostilities with the Neo-Zenebas Empire.

In ZAC 2230, ZOITEC revisited the Gairyuki design, upgrading it with additional ranged weapons and incorporating a third Support Blox Zoid into the Blox-CAD. This variant design was known as the Gairyuki Shin.

Blake uses this Zoid to get his revenge on RD, and is successful in overpowering the Liger Zero Phoenix. In this battle, the Fire Phoenix would preform a kamikaze attack against Blake, sacrificed itself and harming the Gairyuki (although Blake does not actually finish RD or the Liger Zero off, despite the Liger being incapacitated). The Liger Zero later gets a new Fuzor partner, the Jet Falcon, which overpowers the Gairyuki and defeats it (but does not destroy it). This would prove to be the last time RD and Blake fight.

The Gairyuki is shown to have two Fuzor partners, a pair of wild Zoids called the Evo Flyer and Dispelow. They are initially hostile toward Blake, but after defeating them in combat, they join him, forming the Gairyui Speed and Gairyui Destroy (also called Gairyuki Attack). The Evo Flyer is destroyed in combat with the Energy Liger, but the Dispelow is used even in the final episode, where it is able to deal significant damage to Alpha's Berserk Seismos.

Erroneously, Blake's Geno Saurer is called a Gairyuki in a flashback, despite the two being completely unrelated Zoids (indeed, the Gairyuki could not have possibly existed at that stage, as it was built off data from Blake's Berserk Fury, a Zoid which he only received following the destruction of his Geno Saurer).

The Gairyuki appears In the Zoids Saga series in Zoids Saga III: Fuzors and Zoids Saga DS: Legend of Arcadia, as an attainable zoid. In Zoids Struggle Gairyuki is one of the initial usable Zoids. In Struggle it separates to perform one of it's special attacks. Gairyuki also appears in Zoids VS III, making a minor appearance.

The Gairyuki was featured as part of the Zoids Scramble and Zoids Card Colosseum releases of Zoids Trading Cards. Gairyuki Destroy and Gairyuki Fly were also featured in Zoids Scramble. 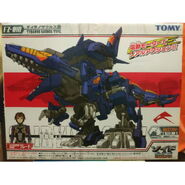 The Gairyuki was released as part of the Zoids (1999) line. The kit comes on fourteen frames, along with a battery-operated motor, eight plastic washers, eighteen rubber caps, two body sections, two jaw pieces, two cockpit pieces, a tail hinge, two Blox, a two-part display stand, and a pilot figure. The Gairyuki is moulded in blue, dark blue, light blue, blue-grey, grey, and black, with one of the sprues moulded completely in translucent orange. A large number of these components were previously used by the Berserk Fury.

The model uses a pair of AAA batteries for motion, and is rare amongst Zoids that it has two motorised modes. In the first mode, once activated, the Zoid walks forwards with its arms waving and the tail sweeping side to side. In the second mode the Zoid stands still, but elevates the tail sections carrying Ray-Absorbing Verniers, while deploying its Charged Particle Cannon.

The Gairyuki is a derivative of the Berserk Fury design. The core body of the two Zoid models is shared, and in the Battle Story the Gairyuki was based around the same wild Zoid. It therefore shares the same production problem with the motor not being able to move because of a broken gear.

The Gairyuki was released as part of the Fuzors line, under the name Gairyuki Shin. No changes were made to the Gairyuki. However, the Gairyuki Shin included an additional frame of parts, an extra Blox, and an updated label sheet including Team Savage Hammer labels. The standard pilot figure was replaced with one of Blake, the Gairyuki's pilot in the Zoids: Fuzors anime. This figure was moulded in rubber, as opposed to the plastic normally used.

Despite its release in the Fuzors model line, the Gairyuki Shin variant is not seen in the anime.

A limited edition version of Gairyuki, also known as Black Gairyuki, was also released in 2005, as a competition prize. This version was recoloured with black armour, metallic grey structure, and a light blue trim. An Evo Flyer in a similar colour scheme was included with the model.

A custom CAS was seen for the Gairyuki. It was also depicted in an artwork by the same artist who did ZGe. The CAS' design was supposed to be based on the oriental dragon. 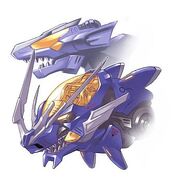