The Gator (ゲーター EZ-022) is a Dimetrodon-Type Zoid, and one of over 200 species of bio-mechanical lifeforms that form the Zoid race depicted in TOMY's Zoids model, toy, and media franchise.

While its sensory capabilities were good, the Gator's actual combat ability was weak at best. The Zoid's sole ranged weapon is a small-bore Gatling cannon, providing only minimal firepower, and its armor is average at best. However, due to its role, the Gator rarely needs to directly engage the enemy.

Like many of the early Zenebas-style Zoids, the Gator's head can detach and act as a separate reconnaissance vehicle, further enhancing its capabilities.

The Gator was one of the earliest Zenebas Zoids, first fielded in the ZAC 1980s. The Gator gave the Zenebas forces a superior command and control platform, exceeding the capabilities of the Republic's Gorgodos. The Gator became a standard part of Zenebas formations, greatly enhancing their capabilities.

The Gator remained in service until about ZAC 2039, when it was replaced with the larger and much more capable Dimetrodon. However, the Dimetrodon was apparently lost following the ZAC 2056 Meteor disaster. As a result, the rebuilt Guylos Empire developed a new version of the Gator for use by its forces.

The Spineback was one of the Zoids found in the Red Mutant army, and one of the more numerous types. Spinebacks were also used to guard red Zoid bases, using their sensors to detect intruders. Numerous Spinebacks also served in Krark's army.

In the Zoids Saga series, the Gator appears as a frequent "wandering monster". It is generally one of the weakest Zoids in the game.

The Gator was featured as part of the Trading Collection Cards set of Zoids Trading Cards. 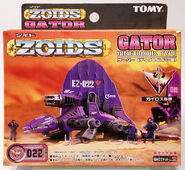 The Gator was released in the Zoids (1983) line. It was introduced in 1983 under designation EMZ-02 later EMZ-14, with production continuing until about 1985.

The Gator comes on three frames along with a small wind-up motor, two separate cockpit pieces, a clear canopy, four rubber caps, a small chrome silver pilot, and label sheets. The Gator is molded in maroon and silver, with a red canopy. The head was shared with several other early Zenebas Zoids, including the Malder and Molga.

The Zoid uses a simple wind-up motor for its motion; once wound, the Zoid walks forward with a stomping gait.

As part of the Spider-Man and Zoids line, the Gator was released in Europe under the name Spineback in 1985. The only changes were to the packaging.

The Gator was released in the US as a part of the Robo Strux line, under the name Reptex. The Zoid was colored in light blue and silver with a red canopy.

The Gator was released as part of the Zoids (1999) line[5]. Introduced in 1999, the Gator's colors were purple and dark grey with a green canopy and a blue pilot.

The Gator was released as part of the Zoids: Build Customize Mobilize line under the name Gatordus[6].

The American version of this Zoid was Hasbro-branded. The international version was TOMY-branded.

The Gator was released in 2006 in the Toy's Dream Project Zenebas Memorial Box Set.

A kit used to advertise Takara Tomy's Dark Zoids Army. The kit was released with the Molga's Dark Version included on February of 2008.