The Genospino is a very large Zoid. Compared to other Zoids in the Zoids: Wild series, it is an XL-sized Zoid.

Also known as the Dragon of Destruction the Genospino appears in Zoids: Wild ZERO as a major antagonist. It is slowly recovered and built by Frank Land over the course of several episodes.

Eventually all the parts for the Genospino are recovered and completed by the Empire. They immediately put the Zoid to work, attacking the Republic in full force.

Initially intended to be piloted by Christopher Giller, the Genospino is ultimately piloted by Aldridge. This is due to Brigadier General Collins (Giller's superior) falling terminally ill. His replacement, Brigadier General Shigaru, changes the pilot due at the last minute.

The Genospino's main weakness is the immense toll it places on its pilot. Knowing this, the Empire sends the Genopino on a beeline towards the capital of the republic.

Using the Sniptera, Dias manages to bait Aldridge to use his Machine Blast far too many times, depleting Aldrige of his stamina. As Aldrige falls unconscious, the Genospino ceases to move.

However, the Zoid later goes rogue. No longer controlled it is lured to a deserted ruined city. While the republic are able to kite it to where they want, they lack the firepower to do any real damage to the Zoid. Eventually, the Rising Liger appears on the scene. The Liger's new weapons combined with knowledge of the location of the Genospino's Zoid Core, make Leo able to defeat the Zoid.

The Genospino is left where it falls in this damaged state until episode 28. Faced with the reality that Frank Land has completed the Omega Rex, the combined Republic and Empire forces agree to reawaken the Genospino as their only way of facing the Omega Rex on equal footing. In episode 48, Genospino was reborn with Omega Rex fight Zero Grizis together. But the monster so strong, so they die . After that, Zero Grizis took them into the Zero Gate. But in episode 49, Genospino and Omega Rex comback again to help Rising Liger to kill the super strongest monster (Zero Grizis)

Like many Zoids that appear as major antagonists, the size of the Genospino in the anime is scaled up dramatically from it's model kit counterpart. 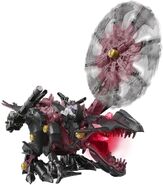