This Zoid was named Zaton in the UK comic. For the similarly-named, but otherwise unrelated Zoid, see Zatton

The Geruder (ゲルダー) is a Triceratops-type Zoid, one of over 200 species of biomechanical lifeforms depicted by TOMY's Zoids model, toy, and media franchise.

The Geruder is designed as a straightforward assault platform. More heavily armed then the contemporary Molga or Marder, the Geruder boasts a pair of powerful electromagnetic launchers, giving it a potent punch for its size. Backing these cannons up was a triple-barrelled shock cannon concealed under an armoured cover. The Zoid shares many parts with the Zatton.

The Geruder's head forward section is well armoured, with a heavy shield helping protect the body from fire. However, because the Zoid is designed for frontal charges, its flanks and rear are poorly armoured. As the Zoid was designed for use in massed numbers, this was not seen as a drawback.

The Geruder was one of the first Zoids created by the Zenebas Empire, appearing in the ZAC 1980s. The Zoid was used alongside other early Zenebas Zoids like the Molga and Marder, usually deployed to spearhead assaults. While more capable then the early Helic Zoids like the Elephantus, the advance of Zoids technology left the Geruder largely obsolete by the ZAC 2030s. By ZAC 2039, the design had been replaced with the larger Black Rhimos. The design was not revived by the Guylos Empire.

The Zaton was one of the types of Zoid found in the Red Mutant army, serving under Redhorn in his campaign of conquest of Zoidstar.

A single Zaton, identified only as "Zaton", joined Krark's army alongside with his partner (and, strangely for a mutant, friend) "Zunder". A rather talkative and philosophical Zoid, Zaton would often wax lyrical in the middle of a battle. Zaton and Zunder became two of Krark's top lieutenants, however even then they tended to act more as independent agents. A strange thing, in one issue of the comic, we can see those two far bigger than a Tank, which is not respecting the scale. It is maybe a mistake in the drawing, and not a way to make those two Zoids different from the others.

Zaton was destroyed by the Black Zoid. 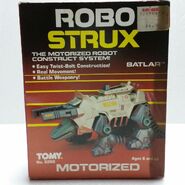 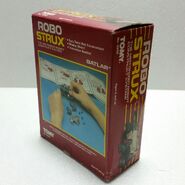 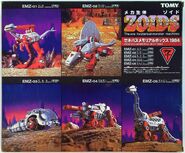 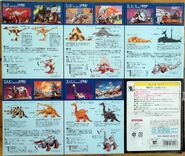 The Geruder comes on three frames along with a small wind-up motor, two separate cockpit pieces, a clear canopy, twelve rubber caps, a small chrome silver pilot, and label sheets. The Geruder is moulded in maroon and silver, with a red canopy. Two of the frames were shared with the Zatton, and the head was shared with several other early Zenebas Zoids, including the Malder and Marder.

The Zoid uses a simple wind-up motor for its motion; once wound, the Zoid walks forwards with a steady shuffling gait. A panel on the Zoid's front could be opened to reveal a hidden cannon.

The Geruder was released in Europe as part of the Spider-Man and Zoids line. Introduced in 1986 it featured the name Zaton . This version was identical to the Zoids (1983) version, save for the packaging. Some catalogues and promotional materials refer to this Zoid as "Zunder".

The Geruder was released in the US as a part of the Robo Strux line, under the name Batlar. The Zoid was colored in light blue and silver.

The Geruder was released in 2006 in the Toy's Dream Project Zenebas Memorial Box Set.