The Gilraptor (ギルラプター, Giruraputā) is a Deinonychus-Type Zoid, one of over 200 species of biomechanical lifeforms depicted by TOMY's Zoids model, toy, and media franchise. Compared to other Zoids in the Zoids: Wild series, it is an M-sized Zoid.

The Gilraptor is a small Zoid with an open-air cockpit.

In Zoids: Wild, Drake's red Gilraptor is known as "Ruin". Pending further release of the series, it is currently unknown if this name is used for his Zoid, or all Gilraptors.

There are three Gilraptors seen in the series, with the most prominent one being the red Gilraptor, piloted by Drake. Gallagher also has a purple Gilraptor, this variant is known as the Gilraptor Commander. Finally, in the past a white Gilraptor is seen to be owned by Drake's parents.

The white Gilraptor is destroyed by Death Metal before the series began. Out of the two Gilraptors used by Drake's parents, this one was the Zoid he favoured most. When Drake's parents try to leave Death Metal, the Gilraptors and Drake are caught. Drake is left with a choice: kill one of the two Zoids, or die himself. Drake thinks about picking the red Zoid, but hesitates too long and Gallagher goes for him. The white Gilraptor jumps in the way and it ends up being killed instead, fulfilling the choice Drake could not make.

It's death causes Drake to work for Death Metal, and lingering resentment about preferring the white Gilraptor causes him much guilt towards the red Gilraptor.

The Gilraptor commander fights twice early in the series (episode 13 and episode 19) and is defeated each time. The injuries sustained here persist until episode 42 where Gallagher sends Drake off with it, essentially on a suicide mission. Drake crushes the resistance base, but the Gilraptor is destroyed from the exertion on it during the fight.

Drake's red Gilraptor lasts for most of the series. Although he takes damage periodically, he is still one of the fastest and most effective members of the Four Heavily Kings. Eventually, in episode 42, Drake is given an ultimatum: Defeat the Wild Liger or have the Gilraptor fed to the Death Rex.

He fights Arashi in solo combat, but is unable to defeat him. Even using his Death Blast, he is still at a disadvantage. Arashi can tell he was pushing the Gilraptor too far, a point Drake knew but had no choice but to accept. During this battle, the Death Metal key is destroyed. With no chance of victory, Drake and Arashi both tell the Gilraptor it's now free. However, the Zoid still stands up for Drake.

Drake becomes aware of the situation, the Gilraptor had been through the same past he had, the same set of impossible decisions. As they both realise this, the Gilraptor bestows its Zoid Key to Drake.

Gilraptors are seen in flashback, but the most common variant is the Gilraptor Kai, used by the Empire and Frank Land. 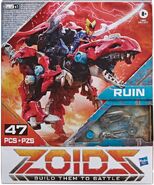 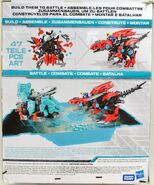 There are two Gilraptor variants, the ZW02 Gilraptor, and the ZW22 Gilraptor Commander. The Commander variant matches the purple and yellow colour scheme used by Gallagher in the anime. The dimensions are the same as the regular Gilraptor, but it has a top speed of 265km/h and an IQ of 108

The Gilraptor was released online by Hasbro under the Zoids: Build Them To Battle line. It used the name Ruin.