The Godos (ゴドス RZ-014) is a Allosaurus-type of Zoid and one of over 200 bio-mechanical lifeforms that form the Zoid race depicted in TOMY's Zoids Franchise.

The Godos is an early Zoid affiliated with the Helic Republic. It is the standard infantry Zoid of the Helic army, designed to work alongside and supplant other early Zoids like the Garius, Elephantus, and Guysak.

The Godos made its debut in ZAC 2030, one of the first new Zoids created from blending Earthing and Zoidian technologies. The design was based on the earlier Garius, trading the older Zoid's high speed for enhanced armor, agility, weapons, and stability. With several upgrades, the Godos would remain in service with the Helic Army through the Central Continent war, until the design was replaced with newer Zoids.

Following the destruction caused by the meteor strike of ZAC 2056, the Helic Republic recreated the Godos, again making it the standard infantry Zoid of the army. The Godos was used through the war on the Western continent, and then on the Central Continent. In later years, it was gradually replaced with Blox designs.

The Godos first appeared in Zoids: Chaotic Century as the standard infantry-type Zoid of the Republican Army. Godos were used en masse by the Helic forces, and were usually plowed down like redshirts. The Zoid was also given role in Zoids: Guardian Force, with the only successful Godos pilot being Raven, who managed to use one in order to destroy an entire Republican base without his Organoid. Godos variants also appeared in other roles, often serving as construction or labor machines.

Throughout the series, it was called Gordos by mistake.

A team of three Godos, the Renegade Force, appeared in the first episode of Zoids: Fuzors, and were effortlessly destroyed by the Black Impact Team's equal number of Blade Ligers. Other Godos also appeared in other episodes.

The Trooperzoid was the standard infantry Zoid of the Blue Zoid armies, and appeared throughout the run of the comic. The Zoid was meant to replace the older Tyrannozoid, but the wear of constant battles meant the two Zoids often worked alongside each other. The Trooperzoid was a match for most of the smaller Red Mutants, but was easily dispatched by the larger ones. The Namer piloted one for several issues.

A Trooperzoid also appeared in the Zoids 2 promotional mini-comic. This is interesting, given that the Trooperzoid/Godos was not a part of the Zoids2 line. 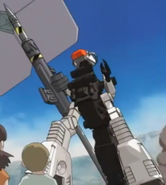 Godos with a Pile Driver

The Godos appears as a common wandering monster in the Zoids Saga series, although by the time it is available to the player, much better Zoids are available.

The Godos was featured in two of the Zoids Trading Cards releases: the Original Battle Game and Trading Collection Cards.

In the final chapter of the Chaotic Century manga, it is revealed that a Godos named 'Noah' which belonged to Raven when he was younger was the cause of his hatred of Zoids. He tried to enter some navigation data into the Zoid's system to enable it to follow his parents to work just so he could join them. Unfortunately, the data was corrupted, and Noah killed his parents before his eyes, sparking off his hatred for Zoids. 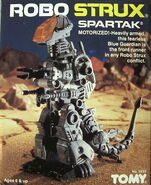 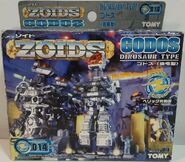 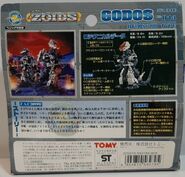 The Godos was released in Japan as part of the Zoids (1983) line. Introduced in 1983, production continued until about 1987.

The Godos comes on four frames, along with a small wind-up motor, a separate head piece, two clear canopies, four rubber caps, two small chrome gold pilots, and label sheets. The Godos is moulded in blue with an orange canopy. One of the frames was originally used by the Garius, while two of the frames were later re-used by the Iguan and another by the Guysack. The Godos comes with two different head modules (one of which is shared with other early Zoids like the Garius), as well as several optional weapons systems.

The Zoid uses a wind-up motor for its motion; once wound, the Godos will walk forwards and wave its arms. The head, weapons, and booster can be manually positioned.

The Godos was released in Europe, as part of the Spider-Man and Zoids line. It bore the name Trooperzoid. Released in 1985-86, this Zoid had two production runs, with differing shades of grey used. One version was identical in appearance to the 1983 version. The other was slightly bluer. It was also produced in France.

The Godos was released in the US as a part of the Robo Strux line in the early 80s. The Zoid was named Spartak, and was coloured in tan and red, with green canopies. The Spartak did not include an optional second head module.

The Godos was released in the Zoids (1999) line. Introduced in 1999, the Godos's design was unchanged, but the colours were altered; the Zoid was a mixture of light and dark grey, with grey pilots.

An upgrade kit was produced for the Godos, the CP-13 Wild Weasel unit. The Wild Weasel Unit consisted of a weapons pack carrying two cannon pods, and a radar dish. The upgrade mounted on the Godos' back, making it very back-heavy and substantially reducing the model's ability to walk. 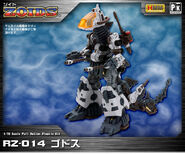 The Dosgodos is one of the only entirely new designs in the Rebirth Century line, though it draws heavily from Godos in its appearance. Rather than reusing past parts, it is a unique kit, and features pieces that let it both walk as a standard windup and act as a more posable Zoid. It is slightly larger than its original counterpart as well. 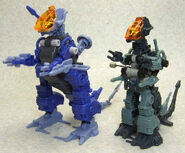 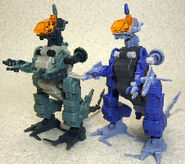 The Dos Godos was released first in brighter blues, and then in an E-Hobby limited version directly based off the OJR Godos' color scheme.

In-story, the Dos Godos faced off against Valga, using its Turbo Acceleration Kick to counteract the sheer speed and momentum of its Gravity Attack. It was one of a number of designs created to act during the heavy electromagnetic interference that followed the meteor-spawned destruction on Zi.

The Tiga Godos is an upgraded Dos Godos, strengthened with melee in mind. Besides an armored cockpit and different guns, the most noticeable change are the large Assault Magnezers on its back, which are designed for close combat in the style of Mad Thunder's drill horns.

The kit replaces the windup motor with a battery-powered one running on button cells, and includes parts enough to also build it as a recolored Dos Godos.