The Gojulas Giga (RZ-064, ゴジュラスギガ) is a Giganatosaurus-type Zoid, one of over 200 species of biomechanical life forms around which the Zoids model, anime, and game franchise is based. The Gojulas Giga is a major Zoid in the Zoids: Fuzors anime.

The Gojulas Giga is capable of switching between two modes; battle mode, and pursuit mode. In battle mode, the Zoid rears back on its tail and hind legs, in an upright, Godzilla-like stance. In this position, the Zoid is most effectively able to use its claws, teeth, and tail in close combat. In pursuit mode, the Gojulas Giga’s body is positioned so that the head, body, and tail are inline, allowing it to move at almost twice the speed of battle mode.

The Gojulas Giga's forte is close quarters combat, and as such it is armed with incredibly powerful jaws that can crush and dismember most enemy Zoids, and a long, heavy tail tipped with a pair of laser blades capable of cutting through even a Death Saurer's armor[citation needed]. In addition, the Gojulas Giga has one of the most powerful E-shields in existence, second only to the special particle absorption shield on the Madthunder[citation needed]. This shield is omni-directional, and surrounds the entire Zoid in a dome of shimmering blue energy. The Gojulas Giga's armor is amongst the strongest of all Zoids, constructed of an alloy called "Ancient Titanium". In addition, the Zoid is equipped with a powerful ECM that protects it from even the Dark Spiner's advanced jamming capabilities.

The Gojulas Giga lacks ranged capability, with only a single ranged weapon, the 32 Shot Zoid Core Cannon. It locks itself to the ground with the support anchors on its legs and energy is drained directly from the Zoid Core and channelled out through the spines on the Zoid's back, shooting upwards before arcing down and out to rain down on anything in the immediate area. Firing this weapon puts immense strain on the Giga's Zoid Core, and as such this weapon can only be used as a weapon of last resort. The Zoid can also be equipped with an adapter that replaces the first two pairs of fins on its shoulders, allowing for the mounting of either the Buster Cannons from the Buster Eagle, or the Republic Supercannons.

The successor to the Gojulas, Gojulas Giga is one of the mightiest Zoids the Helic Republic has ever produced. The Giga, like Zoids such as the Liger Zero, and the Berserk Fury, is based directly off a Wild Zoid. This grants it enhanced power, flexibility, and intelligence over other Zoids, giving it a huge advantage in battle.

The Gojulas Giga first appeared in ZAC 2104, in the aftermath of the near total destruction of the Helic army and the invasion of the Central Continent by the Neo-Zenebas Empire. As the two forces were fighting in the mountains at the center of the continent, the Zoid was able to often attack its opponents at point-blank range, where it was strongest. Because of its strength in close combat, the Gojulas Giga was initially able to hold back the Neo-Zenebas advance; not even the re-introduced Death Stinger was a match for it.

Matters changed, however, with the advent of the Seismosaurus. The powerful Hyper Focused Charged Particle Cannon of the Neo-Zenebas Zoid was able to easily eliminate the Gojulas Giga at long range before the Zoid could close in to use its melee weapons. A single blast was enough to penetrate the Giga's shield and then destroy the Zoid, while the Seismosaurus' thick armor proved to be resistant to the Buster Cannons.

By ZAC 2106, the entire Gojulas Giga force had been destroyed, forcing the Helic forces to retreat to the Eastern Continent.

The first actual anime series the Gojulas Giga has appeared in thus far is Zoids: Fuzors, where it is piloted by Gummie, the chief of the Peace Keeping Bureau. The Gojulas Giga is the strongest Zoid in the PKB arsenal, and is often escorted by Ciao's Arosaurer and Deed's Gorhecks. The Zoid is used as the PKB's "Big Stick", with its mere presence usually enough to deter criminals.

The Gojulas Giga makes its first appearance in the first episode, Knockover on Planet Zi!, when Gummie tries to use it to block the path of RD's Liger Zero. However, the Liger Zero is able to jump over it and escape. It would show up at the end of the episode to break up a fight between RD and Savage Hammer's Berserk Fury, piloted by Blake.

The Gojulas Giga would make a few more minor appearances, but it would not be seen in a combat situation until episode 9, Good Work, Peace Keeping Bureau, where it would fight and defeat an Iron Kong piloted by a gang of Zoid thieves.

The true extent of the Gojulas Giga's power would not be seen until episode 22, The Rampage of the God of Destruction. In this episode, Gummie's Gojulas Giga is sabotaged and goes on a destructive rampage through Blue City, with the combined strength of the Liger Zero Falcon and the Gairyuki Speed failing to stop it. It was only through last minute action by Gummie that Gojulas Giga's attack was put to an end. In episode 23, it is revealed that Gummie takes responsibility for all of the damage caused and is demoted from PKB chief to a traffic officer.

The Gojulas Giga was also present at the final battle. Gummie would join the other Zi Fighters in trying to defeat Alpha's strongest Zoid, the Seismosaurus.

As with many large Zoids in the anime, the Gojulas Giga is often expanded in size for dramatic purposes, appearing at a much larger scale than the Battle Story version and model kit indicate. It is so large that Ciao's Arosaurer only stands knee-high next to it, and its head alone depicted as long as RD's Liger Zero.

The Gojulas does not appear in the Genesis series, however it's distinctive outline can be seen in the intro-clip.

The Gojulas Giga appears in both the Zoids Saga series and in the Zoids VS series. In Zoids Legacy, it is fought against underground, after which the player can obtain the Zoid for his/her team. In Zoids VS II (Zoids Battle Legends), the player fights Gojulas Giga, along with Matrix Dragon, in the Zoids VS battle mode. The Giga features the most HP of any zoid that the player can buy, tied only with Iron Kong Mary at 4200. It can also be equipped with the Buster Cannons, referred to as 'LR Cannon Eagle.'

In Zoids battle Blox Gojulas Giga was both the largest Zoid (one of only a few non-blox Zoids) in the game and the final boss.

In a computer generated commercial made by Tomy, Gojulas Giga was seen towering over Leo Blazes and Unenlagias. The footage was re-used in the introduction to Zoids VS 2.

The model uses a pair of "AA" sized batteries for motion, and a pair of "AAA" sized batteries for lights and sound. The Zoid can be switched between Battle and Pursue Mode, each mode having its own motions. In Battle mode, the Zoid stands upright and walks forward while sweeping its head and tail side to side. The eyes flash green, while the Zoid produces a stomping sound as it walks. In Pursuit mode, the Zoid has its body parallel to the ground, and walks forward while opening and closing its mouth. The eyes light up red, while the Zoid makes roaring noises. The motor used for the Gojulas Giga is underpowered, giving the Zoid a very stiff and slow walk in both modes. 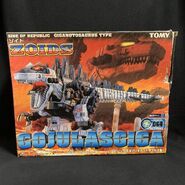 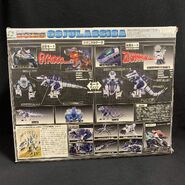 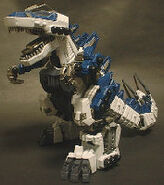 No specific extra weapons were produced for the Gojulas Giga. However it comes with two adapter pieces that replace two of the spine pieces on its back. One of the pieces can be used to either mount the CP-10 Gojulas Cannons or the Buster Cannons form the Buster Eagle. Both of the adapter pieces have BLOX compatible Pegs on the end and can be used to create many BLOX fusions with the Gojulas.

A chromed version was released in limited numbers in Malaysia.

The Gojulas Giga was released as part of the Zoids: Build Customize Mobilize line. In America it was introduced in 2003. The model was the same as the Japanese Giga, but the packaging was changed to reflect the international line. The American box featured Hasbro logos, while the international version had TOMY logos.

In Australia, the Gojulas Giga was introduced as a Target exclusive. No changes were made to the model. Later sales were released in non-exclusive stores.

In September 2003, Toy's Dream Project released the limited edition Proto Gojulas Giga. The Zoid was recolored in silver, grey and black, with orange caps. No changes were made to the model itself. 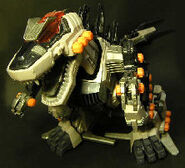 The Gojulas Giga would be reissued once again as part of TOMY's Fuzors line. This version is based on the Zoid used by Gummie in the Fuzors anime, and is remoulded in silver, light blue, and black. Additionally, it comes with a pair of police lights mountable on the shoulders.