The Gordos (RZ-008 ゴルドス) is a Stegosarus Type of Zoid, and one of over 200 species of bio-mechanical lifeforms that form the Zoid race depicted in TOMY's Zoids Franchise.

The Zoid is designed to act as a command and control platform, as well as providing long-range fire support. While not as well armored as the Gojulas, the Gordos boasted superior long-range capabilities. To back up its weapons, the Zoid was armed with a quartet of thagomizer spikes on its tail.

The true strength of the Gordos lay not in its firepower, but in its sensor array. The Zoid was equipped with a powerful long-range radar and communications system, one of the most powerful ever mounted on a Zoid[citation needed].

The Gordos was deployed by the Helic Republic alongside the Gojulas in ZAC 2029. The Gordos was initially very effective against the smaller Zenebas Zoids. Although the new Iron Kong proved to be its superior, the Gordos still remained a capable platform. As more arrived, the Zoid became the main heavy combat Zoid of the Republic's forces.

In ZAC 2035, the Gordos was upgraded with the Republic Supercannons, greatly expanding its firepower and capabilities. The Zoid remained in service, but was gradually phased out in favour of the smaller and more flexible Gorhecks.

The ZAC 2056 meteor disaster destroyed the Gorhecks design, along with the technology needed to produce its sophisticated radar array. As a result, the Republic resumed production of the Gordos for its forces. The Zoid became a key part of the new Republic army, being one of its heaviest and most powerful Zoids.

Many Gordos were seen throughout Zoids: Chaotic Century. The most notable of these was also the first one seen; a white Gordos with a cyan colored canopy, introduced in episode 3. The white Gordos formerly belonged to a commander in the original war 50 years prior to the story, staged in a hidden fortress. When the Zoid suffered from a damaged leg, the commander and his men were forced to abandon the Zoid at the fortress.

The white Gordos did not know that it had been abandoned, and faithfully stayed and defended the fortress, waiting for its friends to return to it one day. Despite its damaged leg, it still fought to defend Van and Fiona from Irvine, (who, at the time, was an antagonist trying to capture Zeke), and even freed Van when he was trapped under rubble by Irvine.

The white Gordos walked with a limp due to an injury in its front leg. For some reason, this animation carried on to other Gordoses depicted in the series. The animation error was never corrected, giving the Gordos a distinctive "shuffling" walk-cycle.

Another Gordos was used by Captain Herman, who piloted one at the battle of Red River and again while defending New Helic city.

Often, multiple Gordos are seen in minor roles, such as shelling the Geno Breaker, or being dispatched by Raven's Geno Saurer.

The Gordos saw less action in Guardian Force, though a golden Gordos with a magnetic pole launcher would be seen in the possession of some bandits, along with similarly colored Command Wolves. The Gordos would battle Van's Blade Liger and be easily dispatched.

The Gordos only appears once in Zoids: New Century, making a brief cameo as one of the Zoids Harry Champ had in his collection.

In the UK Zoids Comic, Gorgon was one of the lead Zoids of the Blue Zoid army. A veteran of many campaigns, Gorgon had been instrumental in the conquest of numerous planets during the golden age of the Zoidariyan Empire. After the fall of the empire, Gorgon joined the Blue Zoids in fighting off the Red Mutants.

Gorgon's Mindrider was killed when Heller and The Namer took control of his Zoid for their own. The Zoid served as a combination of mobile base and transport for the stranded humans for much of the comic's run. It was also briefly used by Redhorn after the destruction of his own Zoid body. 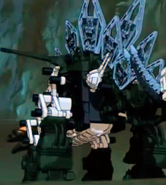 Gordos makes an appearance in the Zoids Saga series as a common wandering monster. An alternate version was available, called the Gordos Long Range, which was simply a Gordos customized with CP-10 Gojulas Cannons.

The Gordos was featured in two of the Zoids Trading Cards releases, the Original Battle Game and Trading Collection Cards. 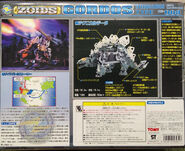 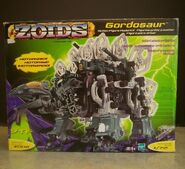 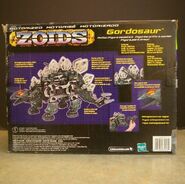 The Gordos was released as part of the Zoids (1983) line.

The Gordos kit comes on six frames; one is shared with the Bigasaur, another with the Mammoth and a third is a weapons frame also shared with the Mammoth, Bigasaur, and Gojulas. The model kit also included a battery-powered motor, canopy cover, thirty-two rubber caps, a frame of washers, two metal weights, two small chromed pilots, and label sheets. The Gordos is moulded in grey, dull green, and dull grey, with grey weapons and an orange canopy.

Particular care must be taken with the tail, as the point of connection with the body is very fragile and easily broken. The Gordos uses a pair of “C” sized batteries for motion. Once activated, the Zoid walks forwards, swinging its head form side to side while opening its jaws.

Like several other Zoids of the time, the Gordos could use a number of different optional weapons that were included in the Republic Customise Set. The Gordos was released in 1984, and was produced up until about 1986.

It is compatible with the CP-10 Super Cannons

The Gordos was released as a part of the Spider-Man and Zoids line in the UK and Europe from 1985 to 1986. This version bore the name Great Gorgon, and identical to the Japanese version, with the exception of the packaging.

The Gordos was released in the U.S. as a part of the Robo Strux line, under the name Gordox. The Zoid was coloured in tan, dull red and white with a green canopy and red caps.

The Gordos was released in the Zoids (1999) line. Introduced in 1999, this Zoid had a lighter colour scheme compared to the original version, and was released with light grey pilots instead of gold.

The Gordos was released as part of the Zoids: Build Customize Mobilize line. It bore the name Gordosaur. The packaging was changed, and featured a different weight than previous Japanese versions.

The Zoid was released in Australia, Europe, and America. The American release was Hasbro Braded, the international version was TOMY branded.

This version was released in Japan as a part of the Yuji Kaida limited edition series in 2003. The Zoid was recolored in dull blue, light blue, and gold with red caps. Additionally, it came with three frames from the Republic Customise Set.