The Gorilla Tron is a gorilla-type of Zoid, a race of biomechanical lifeforms from the fictional Zoids universe. It is also known as Raykong (レイコング, Reikongu).

The Gorilla Tron is a Blox Zoid created by the Helic Republic with an eye to the success of Imperial gorilla-type Zoids, such as the Iron Kong and Hammer Rock. Very agile and flexible, Gorilla Tron is highly capable in broken and dense terrain, and is adept at mountain and urban warfare. It packs a powerful punch for its size in the form of its shoulder-mounted missiles.

The Gorilla Tron has one particularly interesting feature: its core is specially designed to absorb and store energy from enemy beam weapons. The core can then release and share the energy with its Fuzor partner, the Energy Liger. When merged as the Energy Ray Liger, the Energy Liger's systems can be supercharged by the Gorilla Tron's core. The significance of this synergy between Zoids of opposing factions is not clear, but may hint at a shared development at some point in the past.

The Raykong first appears, hidden, in episode 17 of Zoids Fuzors. Despite numerous appearances, the Zoid was not fully revealed and identified until episode 24. It was created by Dr. Pierce for Alpha Richter as a part of the same project as the Energy Liger. When Richter abandoned Pierce's creations for the Seismosaurus, the doctor used his creations to try and undermine Alpha's plans. The Raykong was depicted on several occasions in conflict with the Energy Liger, most likely collecting battle data to be used against the Liger.

The Zoid's light core Blox is depicted as orange with some green, instead of being colorless like the model kit's. Also, when fused with the Energy Liger, the spikes on its shoulders become missiles.

Despite being a Hasbro-designed Zoid, Gorilla Tron was featured as part of the Zoids Scramble release of Zoids Trading Cards. 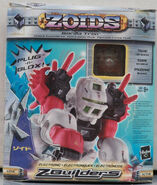 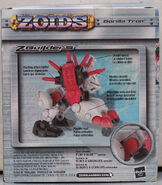 The Gorilla Tron comes on three sprues (red, black and off-white), along with one black "land" Blox, one original-style silver core Blox, one clear Blox with a built in light and battery (this 'light-blox' is shared with the Ray Saurer), a clear eye-piece, four rubber ring caps, a grey Republic pilot, and a label sheet. As with all Hasbro-original Blox Zoids, the Blox are Republic-style but with red (Imperial) innards.

The Zoid is not motorized, but it is very flexible. Pressing a button on the Zoid's back causes the clear Blox to light up. It should be noted that due to the shape of Gorilla Tron's torso armor, this light is partially concealed.

The Gorilla Tron was initially released in North America in 2003. It was also released in Australia in 2004.

The Gorilla Tron was released as a limited edition kit as a part of the Fuzors line under the name Raykong in January 2005 by TOMY. This version is near identical to the Z-Builders version, save for the light red being recolored to a deeper, more metallic red. Uniquely in the Japanese line, the Blox are even the miscolored Hasbro-style. It also included an additional set of instructions depicting how to combine it with the Energy Liger. The instructions use a piece included only with the Japanese Energy Liger, but the part is functionally identical to a normal Blox, and the combination can be achieved by this simple substitution.

The Raykong was originally going to be a mass-release Zoid but, due to the cancellation of the Fuzors line, was reduced to a limited edition.