The Gravity Saurer (グラビティザウラー) is a type of Zoid, a race of mechanical lifeforms from the fictional Zoids universe.

The Gravity Saurer is a Suchomimus-type Zoid, created by the Guylos Empire.

The first Zoid to use the new Gravity Wheel technology, the Gravity Saurer's power system makes it a lot more capable than similarly-sized Zoids. The Gravity Wheel gives the Zoid a high top speed, while enabling it to carry a heavy weapons load and thick armour. Additionally, it gives it near instantaneous acceleration and the ability to leap long distances, even from a standing start.

The Gravity Saurer's firepower is comparable to a Zoid twice its size; The Zoid carries a devastating array of laser weapons, as well as a pair of heavy rocket launchers. Additionally, the Zoid is armed with heavy-duty claws for close combat. Its only weakness is its lack of side or rear mounted weapons.

As a Hasbro-designed Zoid, the Gravity Saurer never appeared in the official battle story. The insignia of the Guylos Empire, as well as it's type number, appears on the model's box and label sheet.

The Gravity Saurer's only anime appearance was in Zoids: Fuzors. Piloted by Sabre, the Zoid was a part of Vareth's unnamed team. Both Zoid and pilot were shown as being reasonably capable; Sabre was able to take on Blake's Gairyuki and at least match it (most of the battle between the Gravity Saurer and the Gairyuki took place off-screen so it's unknown exactly what happened other than that neither Zoid won). While initially hired to fight RD and Blake, Sabre chose to side with them against Alpha Richter. However, she and her teammates at one point tried to catch look to find out about Alpha's Richter Scale group and fought Blake again. The Gairyuki was initially losing until the Dispelow and Evo Flyer appeared to help it, and it then fused with the Evo Flyer and easily defeated all three gravity Zoids.

The Zoid's most powerful technique is the Gravity Atomiser, considered by Vareth to be the team's ultimate weapon. The Zoid runs at high speed, building up a thick cloud of dust and debris. It then uses this ability to run away.

The Gravity Saurer also appeared in Zoids Saga III, as well as an unlockable Zoid (via code) in the Battle mode of Zoids VS III

The Gravity Saurer was featured as part of the Zoids Scramble release of Zoids Trading Cards. 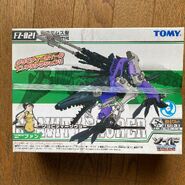 The Gravity Saurer was released in North America in 2002-2003 as part of the Zoids: Build Customize Mobilize line.

The Gravity Saurer comes on four frames, along with a "gravity wheel" ripcord motor, a clear canopy, two missile launchers, eight rubber caps, a small blue pilot, a ripcord, and label sheets. The Gravity Saurer is moulded in dull grey, light purple and silver with a clear blue canopy.

The Zoid uses a ripcord motor for motion; once activated the Zoid walks forwards. The jaw, arms and weapons can be manually positioned.

The Gravity Saurer was released in Japan as a convention-exclusive item at the Zoids 20th Anniversary Expo, in 2003. This version was identical to the Zoids: Build Customize Mobilize version, except for the packaging.

The Gravity Saurer was released in Japan in mid 2004, as a part of the Fuzors model line. This version was recoloured, with metallic purple replacing the light purple, and had a grey pilot. This was the only non-American mass release of the Zoid.