The Groundrago (NBZ-010) (グランドラーゴ, Guranudorāgo) is a dragon-type of Zoid, a race of biomechanical lifeforms from the fictional Zoids universe.

The Groundrago (more accurately transliterated as Grandrago) is a Dinas Empire heavy assault Zoid, formed from the fusion of Raptojaguar, Stegoganzer and Brachiorakete. Its combat strength is colossal, considered sufficient enough to destroy an entire Republican division on its own. Its power comes with a price, however; the Groundrago is notoriously difficult to control, often breaking the control of its pilots and necessitating them to force the rampaging Zoid to self-destruct.

The Groundrago was used in the vanguard of the Dinas invasion of the Beith Republic's capital city. Initially driving through Republic defenses with little or no problem, the assault was interrupted by Beith Zoids. The Beith defenders eventually ran low on supplies, however, and the Groundragos would likely have brushed them aside if it were not for the arrival of Republican Hurricanehawks and their subsequent fusion into Bitegriffons. The Groundragos were too easy a target for the aerial assault, and were forced to separate into their component Zoids to continue the fight.

The Groundrago appears as an enemy; by facing the villain Retsuta as an opponent later in the game, it is possible to unlock and pilot it. The Groundrago features high firepower in the game and has little or no combat skills. It has an alternate form, Groundrago Cannon, that is only available when Retsuta pilots it. This form is blue and features even greater firepower, with a sniper sight (very much like the Konig Wolf), a large, long-range buster cannon, and dual charge lasers on its tail. 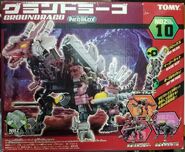 The Groundrago was initially available in April 2006 only by buying the individual releases of Neoblox NBZ-04 through -06, each of which included instructions to build it. In July, the Groundrago was released as a single box set, recolored with a unified color scheme.

No model of the Groundrago Cannon was ever released.