The Gun Sniper (ガンスナイパー) is a Velociraptor-type Zoid, a race of biomechanical lifeforms from the fictional Zoids universe.

The Zoid's primary weapon is a 144mm Sniper Rifle built into the Zoid's tail. Although it requires the Gun Sniper to be immobilised in order to fire, the powerful weapon is capable of disabling far larger Zoids with a single shot. Secondary weapons include a respectable selection of both ranged weapons and close-combat claws and fangs, making the Gun Sniper very well armed for its diminutive size.

One of the first Helic Zoids created using the Organoid System, the Gun Sniper is considered to be one of the most intelligent Zoids in active service, capable of "learning" from its pilot. Light and agile, the Zoid is designed to function both as an infantry machine and as a fire support Zoid.

Following the acquisition of the Organoid System technology, the Helic Republic began development of a new generation of Zoids to counter the newer Guylos designs, while supplementing their own forces. Designed to replace older infantry Zoids like the Godos, the Gun Sniper proved to be very effective. It was more than capable against similar Guylos designs, especially the newer Rev Raptor, which was considered to be its counterpart. By ZAC 2100, the Gun Sniper had become the standard infantry Zoid of the Helic army. It was later replaced by the Snipe Master.

The Gun Sniper first appeared in Zoids: Guardian Force. Initially introduced as a brand-new Helic Zoid, the Gun Sniper quickly (and rather inexplicably) appeared en-masse in the hands of not only the Helic military, but also bandits and mercenaries. In one particularly glaring example, a professional assassin known as "Phantom" appeared to have been using the Zoid longer than the Helic military had.

The first Gun Sniper was used by an outlaw masquerading as a military official, who was attempting to use it to steal gold. This Zoid proved to be powerful for its size, being both highly agile and packing a large amount of arsenal for its size. It even managed to break Van Flyheight's Blade Liger's Energy Shield, though Van's high level of piloting skill allowed him to seize victory anyway.

One notable use of the Gun Sniper was by Hiltz's Organoid, Ambient, which fused with one and attacked Van and the Blade Liger. It is noteworthy for the radical transformation it undertook, growing spikes and turning red. It was eventually defeated by Van as Zeke gained a new ability that made the Blade Liger even more responsive to Van's ever-increasing skill.

Using data from their first encounter with the Gun Sniper, the military would produce a whole unit of specially modified Gun Snipers, armed with anti-shield munitions. Though it had proved effectively indestructible in the past (able to withstand heavy military assaults, and even barrages from a squad of Gojulas), these Gun Snipers proved able to break the Geno Breaker's energy shield, which allowed the Zoid to be effectively attacked by the Guardian Force. The battle was not concluded however, as the newly awakened Death Stinger interrupted the skirmish with a blast from its Charged Particle Cannon.

In this series, several Gun Snipers were seen with the Wild Weasel Unit attached.

Naomi Fluegel used a customized Gun Sniper (the "Gun Sniper Naomi Special"). The Gun Sniper Naomi Special is largely unchanged from a normal Gun Sniper, but sports an enhanced sniper rifle and a red color scheme. Several other Gun Snipers appeared in the series, and one shop was seen to exclusively deal in variants of the Zoid. Two were seen in battle alongside Naomi (pictured at the top of the page), piloted by a pair of novice pilots appearing only in episode two.

After the destruction of her Dibison by the Elephander, Leena Toros purchased a modified Gun Sniper, which had been equipped with a large array of weapons. Referred to as the "Gun Sniper Leena Special" in supporting media, this Zoid is customized to have a Wild Weasel Unit, two Beam Gatling units, two triple launcher units, and a quartet of missile pods in addition to all its standard armaments. It also has high-capacity stabilizers and reinforced parts in various areas. Despite the weight the upgraded weapons afforded it, the Gun Sniper LS was still fairly agile. Like the Dibison (and unlike every other Zoid used by the Blitz Team), Leena's Gun Sniper jumped out of the Hover Cargo's lower front hatch, rather than being ejected from the catapult or lowered from the side panel, however there are times it is launched from the catapult, such as episode 13, and even in episode 17 used the catapult's energy to supercharge its weapons enough to defeat Laon's Storm Sworders.

Naomi criticized Leena's Zoid initially, calling it "ridiculous", sparking a long-term rivalry between the two Gun Sniper pilots. Nonetheless, they would fight side-by-side when they were attacked by the Sand Stingray gang and their customized Sinkers, which the Gun Sniper LS eventually destroyed with an assault from all its weapons at once.

Much like the Dibison that preceded it, the Gun Sniper LS had a tendency to be one of the first of the Blitz Team's Zoids to be defeated, despite its considerable arsenal.

What is notable about the standard Gun Snipers seen in New Century was that they all had orange-colored caps instead of the yellow ones seen on the Zoid's model counterparts.

Gun Snipers appeared in several episodes of Zoids: Fuzors, usually in supporting roles. Interestingly enough, all the Gun Snipers in Fuzors sported the same custom configuration as the one used by Leena in New Century.

Toge Sniper from Guardian Force, a Gun Sniper WW being enhanced by Ambient 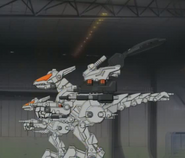 The Gun Sniper LS features in the New Century manga. It is Leena's Zoid and plays a similar role as in the anime. There is no introduction for the Zoid, it is simply used in chapters 3 and 4. The Dibison was used in chapters 1 and 2, but it was not shown to be totaled by the Elephander. Naomi does not feature in the manga, so her Gun Sniper (and her partners) do not feature. 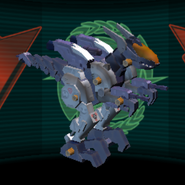 Gun Sniper from Zoids VS series 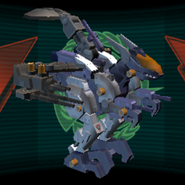 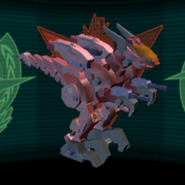 The Gun Sniper was featured in every Zoids Trading Cards release, except for the Original Battle Card Game.

The Gun Sniper comes on four frames[13], along with a small wind-up motor, a clear canopy, two pre-assembled missile launchers, 12 rubber caps, a small grey pilot, and label sheets. The Zoid is molded in light and dark blue, with orange caps.

The Zoid uses a simple wind-up motor for its motion; once wound, the Zoid will walk forward and wave its arms. The back-mounted thrusters house an array of missiles, which can be manually opened. The boosters come pre-assembled. A button on the top of both can be pressed, which releases the thruster nozzles and an internal spring positions them outward. The Gun Sniper has suffered from consistently poor production quality, with many models being unable to walk and exhibiting poor moulding detail[citation needed].

An upgrade kit has been released for the Gun Sniper. The CP-13 Wild Weasel unit consists of a replacement back plate mounting two outrigger pods, each containing two pairs of cannons, for a total of eight cannons.

A limited edition version of the Gun Sniper was released in 2001[citation needed], recolored in red and black to match Naomi Fluegel's Zoid from the New Century anime.

In October 2009, a high-quality remodeled Gun Sniper was released by TOMY and Kotobukiya in the High-end Master Model (HMM) line. The HMM version features more detailed parts (such as a removable Zoid Core) and greater articulation but lacks the motor of many of its predecessors. It was given the same designation number as its NJR counterpart, RZ-030.

The HMM Zoids 1/72 Gun Sniper Naomi Special with Wild Weasel Unit was released in March 2010. A pilot figure of Naomi Fluegel is included and comes pre-painted. An optional feature of the Zoid is that one may remove the redesigned Wild Weasel Unit and attach it to a regular HMM Gun Sniper.

The third HMM Gun Sniper, the HMM Gun Sniper Leena Special has the same set of weapons that were seen on Leena Toros' Zoid in the New Century anime series. The Zoid has anime accurate colors, and comes with a pre-painted Leena pilot figurine. Furthermore, it comes with a Zoid-sized shopping basket similar to the one seen in Episode 15 of New Century.

On April 27, 2019, at the 2nd Stand River Battle event, Kotobukiya announced that they will be releasing a Gun Sniper Bone Color Ver. at the Dinosaur Expo 2019 event in July 2019. It was also released as a Kotobukiya Shop Exclusive on October 18, 2019. 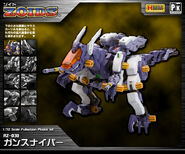 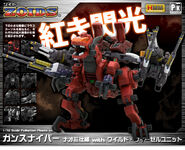 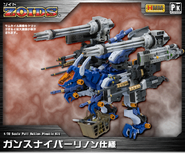