The Gun Tiger (ガンタイガー) (EZ-063) is a Tiger-type Zoid, one of over 200 species of biomechanical lifeforms depicted by TOMY's Zoids model, toy, and media franchise.

The Gun Tiger is a Tiger-type Zoid, created by the Neo-Zenebas Empire. The head folds down to reveal the large Static Magnum housed in the neck.

The Gun Tiger was the last of the small, or "SS", class Zoids developed by the Neo Zenebas in ZAC 2101. It was also the last SS type Zoids deployed by either faction before the use of Blox Zoids. Created for swift, light combat and as a counter to the Saberlion, Gun Tiger saw service alongside the Eisen Dragoons. While it's long range capabilities proved effective against it's melee-bound rival, the Gun Tiger's success would be short lived. Like other Zoids of it's class, Gun Tiger would be outmatched by the Republic's new Blox Zoids, the Leoblaze and Unenlagia. Following the trend, the Neo Zenebas soon replaced Gun Tiger with unmanned Chimeric-Blox Zoids.

Gun Tiger was one of the first Zoids to appear in Legacy. It is Juno's first Zoid, possessing roughly the same power as Zeru's Saberlion. The Static Magnum gun is by far the most powerful weapon on the Gun Tiger. The player keeps this Zoid even after Juno leaves the party, as such this becomes the de-facto Zoid for Bit Cloud. Bit's first appearance in Zoids Legacy is set before he receives the Liger Zero in Zoids: New Century, and as such lacks a Zoid of his own. 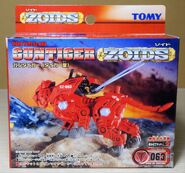 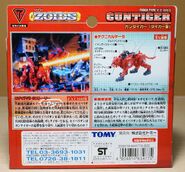 The Gun Tiger was first released as part of the Zoids (1999) line. The Gun Tiger comes with six frames; one black, three bright red, one light grey which includes the caps and one clear green which includes the eyes. Once complete Gun Tiger is posable and it's Static Magnum gun can be concealed. The box depicts it as a Neo Zenebas Zoid facing off with Saberlion.

The Gun Tiger was released as part of the Zoids: Build Customize line. Like the Diloforce, the American release would see an erroneous Helic Republic logo above its designation. The USA box has a TOMY logo, as opposed to many other USA Zoids which were Hasbro branded.