The Gungyalado (ガン・ギャラド Gun Gyalado) is a Dragon-type Zoid, a race of biomechanical lifeforms from the fictional Zoids universe.

The Gungyalado is a Dragon-type Zoid created by the Guylos Empire.

As the Gilvader was too complex and expensive for mass production, the Guylos Empire sought to develop a scaled-down version. The end result was the Gungyalado, one of the most fearsome Zoids ever created. Its primary weapon is the Hyper Charged Particle Cannon.

Like its larger counterpart, the Gungyalado is capable of operating on land and in the air. It can transform between biped and quadruped forms, allowing it to adapt to different combat situations and environments. When walking in these forms its top speed is dramatically reduced. Despite this, the design is extremely agile for its size and mass, even in the air. To further enhance its capabilities, the Zoid is protected by a form of laser-resistant armor known as "Ice Metal" similar to that on the Ice Blazer.

The Gungyalado first appeared in ZAC 2056, at the start of the last phase of the first war between Helic and Guylos forces. Swarms of Gungyalado were sent to invade the Helic Republic, unleashing terrible devastation. The Orudios, which had been effective against the Gilvader, was overwhelmed by the Gungyalado's speed, firepower, and sheer numbers.

The arrival of the King Gojulas changed all that. The powerful new Zoid was able to devastate the Guylos forces, advancing seemingly unopposed. The bulk of the Gungyalado force was destroyed in combat with the new Helic weapon, the remainder being wiped out in the meteor strike that occurred shortly afterwards.

The Gungyalado's sole media appearance is in the Game Boy Color game Jashin Fukkatsu! Geno Breaker Hen (Evil God Revived! Geno Breaker Story), where they appear as powerful wandering monsters. In addition to Gungyalado being useful to catch and raise, their Ice Metal learns a self-healing move as its final technique. Unlike most other parts that do, it can be removed and placed on other Zoids to teach them the technique too. 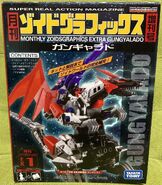 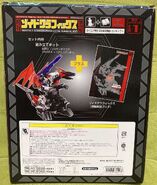 The Gungyalado kit comes on seven frames, along with a battery-powered motor, an axle with two gears, twenty four rubber caps, a tab of two rubber stoppers, a small chromed pilot, label sheets, and an OJR cataloge. The Gungyalado is molded in black, purple, and smoky chrome silver, along with a translucent red canopy and wings. One of the frames was originally issued separately as the GU-02 Pulse Cannon.

The Gungyalado is a part of the Grade Up series of Zoids. The Gungyalado's Grade Up port is normally connected to the Pulse Cannon, but additional weapons can be mounted on top of that. Due to its design, the Zoid cannot use the GU-03 Eye Flasher, but is fully compatible with the others.

The Gungyalado uses a single AA sized battery. Once activated, the Zoid walks forwards, its jaws opening and the pulse cannon spinning. The Zoid can be positioned in either two or four-legged mode and will walk in either; however, it will not walk with the body partway between the two modes.

The Gungyalado was first released in 1990, and had a relatively short production run.

In early 2005, it was reported that the Gungyalado would be re-issued as a part of the Zoids: Genesis model line with the designation GZ-018. The report was incorrect, and it would be the Gildragon that was released with this designation.

Tomy released the kit in November 2008 as part of the Zoids Graphics EX line. The main difference from the original kit is a revised battery cover that now has an additional screw-lock. This release is currently the only piece of official media to feature a romanised name for this Zoid and is the source of the "Gungyalado" spelling.