The Gustav (025 グスタフ) is an Insect-type of Zoid, a race of biomechanical lifeforms from the fictional Zoids universe. Gustavs feature heavily in the anime and games, and are the only non-combatant Zoids produced as a 1/72 scale model.

The Gustav is a Transport Zoid.

While its land speed is only average, the Gustav has an incredibly long range[citation needed] and great endurance. Furthermore, the Zoid has incredible strength; it can pull up to 250 tons[citation needed] of cargo on its two trailers, and can carry most of that without losing any speed. This has made it the premier cargo-hauling Zoid on Zi.

The Gustav's armor is amongst the thickest on any Zoid, only exceeded by massive machines like the Ultrasaurus and Deathsaurer. However, the Zoid is completely unarmed. Some Gustavs in private ownership have been modified to carry weapons for defense, with varying degrees of success.

The Gustav first appeared in the early ZAC 2030s, used by the Helic Forces. The Zoid quickly became the Helic army's standard transport unit, and was soon adopted by the Zenebas Empire as well. The Gustav served with both forces for the duration of the war.

Over time the Gustav spread to independent operators and civilian users across all of Zi. Numerous Gustavs were used by freelance operators prior to the Western Continent war in ZAC 2099. Many of these were later acquired by both the Helic and Guylos forces to use in support of their armies.

A maroon Gustav is the key Zoid used by Moonbay during Zoids: Chaotic Century and Zoids: Guardian Force. The Gustav's two trailers are used to carry the Command Wolf and Shield Liger on long-distance journeys.

During the Guardian Force series, Moonbay's Gustav is seriously damaged by the Charged Particle Cannon from Raven's Geno Saurer. However, the thick armor of the Gustav was able to protect the Zoid Core, allowing the Zoid to be rebuilt. For the rest of the series, however, one segment of the Gustav's shell is white, implying the spare part came from a standard Gustav.

Moonbay's Gustav is also shown to be armed, with a pair of stubby, forward-mounted cannons hidden behind a panel above the cockpit. This is likely to be a personal modification, as no other Gustav shown in the anime has been armed. (Incidentally, this would be a difficult modification to make on the model, as that panel holds the shell together.)

Gustavs were used in Zoids: New Century as transports by a number of teams, most notably the Fluegel Team. Moonbay's Gustav from Guardian Force (right down to the white armor segment) makes a cameo appearance in the background in episode 23.

In Zoids: Fuzors, Sweet drives a Gustav that is used to support and transport the Mach Storm Zoids. The Gustav's appearance is somewhat different from the previous shows; rather than a pair of open-topped tracked trailers, the Zoid pulls a single, large, enclosed trailer. Haldo also used a Gustav with a similar design. Sweet's Gustav followed the OJR color scheme. Haldo's Gustav was similar to the OJR as it had a white shell, but was different as it had a blue underbody.

Several Gustavs appeared in Zoids: Genesis. They mostly carried large, box-like trailers, and were used by almost every faction. Digald's had a grey shell and maroon underbody, while the anti-Digald forces had a light blue shell and dark blue body. Yakku, a character introduced in the second half of the series, had one similar to Moonbay's seen in the previous series (though it had a vastly different cockpit interior and trailer). Zairin's unit's Gustav could be distinguished from the others because it had a symbol of a Rose wrapped around a lightning bolt on the trailer. While seen frequently, Gustavs played relatively minor roles.

The external size, while slightly larger, was not consistent with the size of the cockpit; the Zoid's cockpit interior is far larger than its exterior would allow for.

In Fuzors, this discrepancy was addressed to a degree; the Gustav retained the five-man cockpit, but the exterior was depicted as being significantly larger.

Inside the cockpit in Zoids Genesis 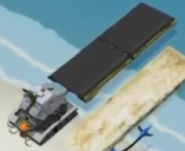 In the UK comic, a Gustav known as the Red Scavenger appears. Rather than battling other Zoids, Red Scavenger collects their debris and rebuilds them, effectively prolonging the conflict.

Red Scavenger was found in the lost city of Estorya by Redhorn the Terrible after his body was destroyed. Redhorn reawakened the Zoid, who rebuilt his body for him. After Redhorn destroyed Mammoth, Red Scavenger joined his army. However, Red Scavenger's final act - and the final scene ever depicted in the comic - was to reclaim Mammoth's debris, presumably to rebuild him.

In the Zoids Saga series of Game Boy Advance games, a Gustav is used as the characters' mode of transportation in the game-world. In Zoids Legacy, this is later upgraded to a Hover Cargo and even later to Zoids like the Dragoon Nest and Whale King. The Gustav, being unable to travel over water, is used as a plot device to keep players from straying to areas of the map without first going to their next immediate goal. There is no limit to the number of Zoids a transport can carry in these games, all transporters can hold the same number of Zoids. Whenever the players gain access to Command functions (if the game has one), using a Supporting Fire may order the transport Zoid to bombard the enemies, in this case the Gustav will fire its forward-mounted cannons. In Zoids: Legacy the weight is listed as 9.36t, instead of 68t from the model kit.

The Gustav can also be seen in Zoids VS series. In Zoids VS II (Zoids Battle Legends), a Gustav is fought in the 3rd battle of the Chaotic Century / Gaurdian Force Battle Mode, alongside a Shield Liger. The player can also unlock, and then buy a Gustav in Battle Mode. It can be equipped with one of 2 guns, both of which mount just below the radar. 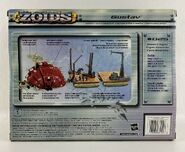 The Gustav was first introduced as part of the Zoids (1983) line.

The Gustav kit comes on five frames[citation needed], along with a battery-powered motor, a semi-transparent canopy cover, two flat trailer bases, twenty-four rubber caps, a small chromed gold pilot and label sheets. The trailer bases were originally used as a part of the Zoids Diorama Base models. The Gustav is moulded in light green and light grey, with a smoke-coloured canopy and black trailers.

The Gustav uses a pair of “AA” sized batteries for motion. Once activated, the Zoid rolls forwards at a reasonable pace, while the shell expands and contracts and the top radar mast rotates. Despite the depictions in the anime, the model Gustav is only capable of carrying a single Blade Liger-size Zoid on its two trailers.

The Zoid can carry large models with no loss of performance.

The original Gustav was designated as RPZ-02, the same type number as the Shield Liger.

The Gustav was released in Europe as part of the Spider-Man and Zoids under the name of Red Scavenger. There were no physical changes to the model, although the colours were changed. The green body of the Zoid was replaced with red, while the white armour-shell became silver, and the canopy red. Additionally, the pilot was changed from gold to silver, and the label sheet was changed to give it Zenebas logos[citation needed]. The model kit also included instructions for repainting the Zoid as a Blue Zoid[citation needed], with colours that would have closely matched the original version.

Though unconfirmed, this may have been a limited edition model was released in Japan during the early 80s[citation needed]. The model was essentially a repackaged Red Scavenger, with no changes to the design. Assuming it exists, this model is considered to be one of the rarest Zoids ever released.

The Gustav was released as part of the Zoids (1999) line.

The Gustav model, known as Moonbay's Custom, was coloured with a tan body, red armour-shell, and orange trailers. Additionally, two frames of cranes and other tools were included with the model; these were re-used from one of the OJR Diorama sets.

Although there were no changes to the model itself[citation needed], the motor was redesigned to work from a single AA battery and had a screw-shut cover rather than the original clip-shut cover. Custom stickers are included[citation needed], and figures of Moonbay (one seated, one standing), Van, Fiona and Zeke were included. The standard pilot figure was included as well.

The Gustav was released with the first wave of Gachapon minis.

The USA version was Hasbro branded[4], the international version was TOMY branded[citation needed].

D-Style Zoids are smaller then most released Zoids and have large "Chibi" heads similar to Bandai's Super Deformed series of Gundam.