The Guysak (ガイサック RZ-002) (also stylized as Guysack in the Japanese Release and Gusak in the American Release) is a Scorpion-Type Zoid, and one of over 200 species of bio-mechanical lifeforms that form the Zoid race and provide the basis for TOMY's Zoids franchise.

The Guysak is a small-scale infantry Zoid used by the Helic Republic. It is one of the oldest Zoid designs, based on the older Gurantula, sharing the same basic fuselage and cockpit design. It operates best in sandy deserts, where it is capable of burrowing into the loose soil to launch surprise attacks. Its primary weapon is the AZ30mm Beam Rifle on its tail, which can optionally be replaced by a 70mm beam cannon.

Guysaks appeared in the Marvel Zoids comics under the name of Scorpozoid, and were members of the Blue Zoid faction.

The Guysak's first animated appearance was in Zoids: Chaotic Century. The basic unit was usually seen in the possession of anonymous Republican soldiers. Often, they were used as automated guards and sentries referred to as "Sleepers", which would lie underground, attacking any intruders en masse. Generally, they amounted to little more than cannon fodder and were easily dispatched by the main characters.

However, a few Guysaks appeared in more significant roles. The first of these was a sky-blue colored Gusak piloted by the character Bull, a rookie member of the Desert Arcobaleno Gang, which appeared in the first episode, "The Boy From Planet Zi," and was the first Zoid to be depicted in the anime. Bull had just recently acquired the Zoid, and pursued Van Flyheight through the desert to test its strength, until he was accidentally buried under the remains of a collapsing Gojulas wreck.

Bull and his Guysak would re-appear later in the episode to try and steal Van's newly found Organoid, Zeke, fighting it briefly and eventually being defeated by the Organoid. Bull and his Guysak would be seen again and for the last time in episode 4, "The Protectors", when Bull assisted the rest of his gang in raiding a small village. He briefly fought against Van, but the Guysak was quickly destroyed by Van's Shield Liger.

Also of note is the Guysak Stinger Special, possessed by the bishōnen mercenary "Stinger." This custom Guysak was painted bright red with a green canopy, along with a different head design, making it resemble an Imperial Zoid. In addition to its custom paint job, it was also far more powerful than any Guysak depicted before or since, sporting a pair of side-mounted machine guns, a Nerve Gas Bomb Launcher and a top speed three times greater than a typical Guysak. When Stinger first made his appearance, he used this Guysak to easily dispatch a trio of Dark Horns being piloted by the assassin Metlinick and his thugs, using its greater speed to outmaneuver them and then knock them out with a trio of Nerve Gas Bombs. He later lent this Guysak to one of Metlinick's thugs. Van (whose Shield Liger had recently been destroyed by Raven's Geno Saurer) was able to steal it, using it to take out a Dark Horn by tunneling underneath it. Eventually, the Guysak Stinger Special was destroyed in battle against Stinger's custom Zaber Fang.

Guysaks were occasionally seen in Guardian Force as well, though not as often as they were in Chaotic Century. They filled mostly the same roles, though a few variants were seen in non-combat roles, developed for mine-detection and construction purposes.

Guysaks appeared twice during Zoids: New Century. The first instance in episode 8, "Invasion of the Fierce Tigers - Transform to Zero Schneider," where a pair was briefly seen being destroyed by the Tigers team during its winning streak with the aid of Dr. Laon. Another Guysak appeared in episode 12: "Zero is Stolen: The Fiery Battle". Here, a single Guysak was seen in possession of the Backdraft group, and it was used in a demonstrative match against Bit Cloud's Liger Zero.

Guysaks made appearances in Zoids: Fuzors, again as common cannon-fodder Zoids. The Gusaks in Fuzors, however, were all painted lime green, as opposed to the dusty brown Gusaks seen in previous series. 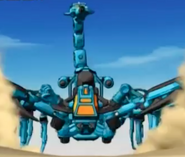 A Blue Guysak that Bull pilots. 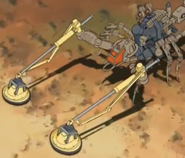 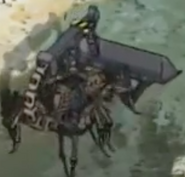 The Guysak appears in the Zoids Saga series as a common wandering monster. At one point in Zoids Legacy the player fights Stinger and his Guysak Stinger, which is later available to the player in the game.

The Guysak was featured as part of the Trading Collection Cards set of Zoids Trading Cards. 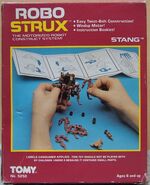 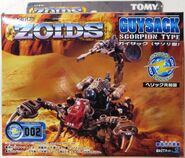 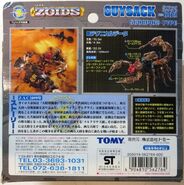 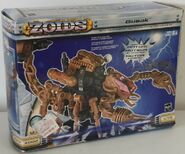 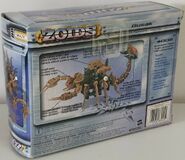 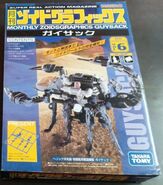 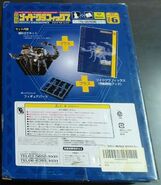 The first Guysack release was colored in a dark blue and light gray and had a gold chrome pilot figure. The Zoid shares its head with the Godos. Several other parts like the beam rifle on its tail and the smoke dischargers on its side are all shared with the earlier Mechabonica kits like the Garius, Glidoler and Elephantus. The Zoid has a wind up motor. The claws, smoke dischargers, and the beam rifle on its tail can all be adjusted.

This Zoid comes with an optional "white head" cockpit style that can be used instead of the standard head. It is possible to replace the tail gun mount with the cockpit and place the smoke dischargers on the sides as weapon mounts to create what is now known as the "Beam Cannon" mode for the Guysack.

The Guysack was released as part of the Spider-Man and Zoids line, under the name of Scorpozoid. The zoid is identical to the 1983 version. It was produced in France.

The Zoid was released as a part of the Robo Strux under the name Stang. It had a new color scheme, being mostly red and tan. In addition, this was the first release of the Guysack that did not have the extra cockpit part.

The Zoid was also released as a part of the Technozoids line. It was recolored in new shades of blue and renamed Evil Scorpion[5]. It is the one of the very few Zoids in the line that shares a part of its name with another model in the Technozoid line. That Zoid would be the Evil Pegasus, the Technozoid version of the Orudios .

Like the Robostrux Stang, this version did not include the "white head" cockpit.

The Guysack was the second Republic Zoid of the Zoic Android line introduced on August 28 1999. The Zoid is not mentioned in the section of Battle Story printed on the packaging; this is instead used to describe the fictional events occurring between the end of the previous line and the start of the Zoic Android timeline.

The Zoid was recolored in a desert brown and gray. The Zoid comes with a standard gray pilot figure. The Zoid comes with all of the original parts from the original version. In addition, it comes with new extra parts that allow it to switch between different modes like the Elephander. There was a new, extra set of smoke dischargers as well as a new beam rifle. The modes are identified by the type of weapon mount on their tail. The cockpit and smoke dischargers are interchangeable. All of the different modes are detailed below.

One mode is the Tail Gun Mode. (Originally Beam Rifle Mode) This mode uses a recolored version of the original Beam Rifle. Because of the new Beam Rifle that was included with the kit, it has also been called the Tail Gun mode by fans to avoid confusion.

Another mode is the (New) Beam Rifle Mode. ([New] Tail Gun Mode) This mode features a seat with no canopy that replaces the tail gun mount on the tail. Then a radar dish is placed on 1 side of the seat while on the other side, the new beam rifle is placed. This mode uses the new beam rifle/tail gun that is included with the kit. In regards to the Battlestory, it is a more efficient upgrade of the original Beam Rifle in terms of power, accuracy and range. This mode is featured on the box art of the box. The pilot may also be placed in this seat. The new beam rifle may also be placed by itself similarly to the Tail Gun Mode. In addition, the seat and radar can also be placed by itself, which although unpopular and not even considered an actual mode by most fans, is known as the Radar Mode.

The Guysak was released as part of the Zoids: Build Customize Mobilize line. It bore the name Gusak. The model is a slightly lighter color than the 1999 version, but otherwise, there are no physical changes to the model or its extra parts. The box art shows it using the Beam Cannon Mode.

The Guysack was released as a part of the Zoids Graphics Line. The Zoid included all the parts from 1983 and 1999 versions. The Zoid was colored exactly the same as the 1999 version.