The Hammer Rock (ハンマーロック) is a Gorilla-type of Zoid affiliated with the Zenebas Empire, and is one of over 200 species of bio-mechanical lifeforms that form the Zoid race depicted in TOMY's Zoids franchise.

The Hammer Rock is a Gorilla-type Zoid created and used by the Zenebas Empire.

It was one of the early model Zoids. It is a miniaturized version of the Iron Kong, which specializes in independent special duties.

The Hammer Rock was featured as part of the Empire Booster Packs for the Original Battle Card Game of Zoids Trading Cards.

The Hammer Rock comes on four frames along with a small wind-up motor, a separate head piece, a clear canopy, two sprues of six rubber caps each, a small silver-chrome pilot and label sheets. The Hammer Rock is molded in maroon and silver with a red canopy. The head was shared with several other Imperial Zoids, including the Malder and Molga.

The Zoid uses a simple wind-up motor for its motion; once wound, the Zoid walks forwards at a reasonable pace. The Zoid's head, chest armor, shoulder and back weapons can all be manually positioned, and the canopy opened.

A gold-chromed Hammer Rock was released by Tomy as a contest prize. It is one of the sole official chromes from the 1983 line.

The kit was issued in Europe as part of the Spider-Man and Zoids line. It bore the name Zore. It is grey and black, with an orange canopy. It is part of the blue Zoid faction.

It was issued as part of the Zoids (1999) line. The CP-26 could be attached to add to the Hammer Rock's offensive capabilities. Its colour scheme features a dark body and light arms. 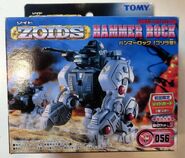 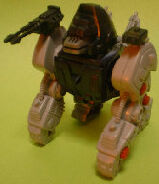 A heavily customized version was done by Dengeki Hobby Magazine accompanied by a customized Blade Hawk which it could also combine with. Named Tobizaru, the Zoid appeared in the Zoids: Generations storyline. A custom was made that features a new color scheme, shoulder-mounted weapons and the ability to wield a sword because of the customized hands.

The original kit was re-issued as part of the new Zoids Graphics line.