The Helcat (ヘルキャット EZ-023) (also stylized as Hellcat[7]) is a Panther-type Zoid, and is one of over 200 species of bio-mechanical lifeforms that form the Zoid race depicted in TOMY's Zoids franchise.

The Helcat is a small, high-speed Zoid developed primarily for stealth and recon operations. It boasts a multitude of specialised features reflecting its role, such as highly advanced sensors, a heat dispensing system to minimise its heat signature, and a sound muffling system on its legs enabling it to run near-silently. However, the Helcat is best known for its ability to turn completely invisible thanks to its stealth shield, which enables it to avoid visual detection.

However, Zoids with advanced sensory equipment such as the Shadow Fox can see right through the Helcat's stealth shield. In addition, the Zoid is only lightly armed and armored, making it vulnerable to attack if it is spotted. Despite this, it is considered a highly capable machine.

Introduced in ZAC 2034, the Helcat was a pioneer in high-speed and stealth combat and was one of the new Zoids developed post-Human Arrival. What it lacked in armour, it made up for in stealth. The Helcat was designed for surprise attacks in forest and mountain regions, and was nicknamed the "Jungle Assassin" because of its advanced stealth technology and its ability to engage enemy forces silently. This left more noticeable Zoids like the Command Wolf and other Republic Zoids outmatched in battle, and the Helcat would continue to be used with great effect.

During the Western Continent War post-Cataclysm, the Helcat was pressed into service again in the ranks of the Guylos Empire- retaining its position as a stealthy killer. Often hunting in packs, Helcats were able to ambush and take down Zoids far larger than themselves like a Gordos. As sensor systems developed, modern Zoids like the Shadow Fox were able to penetrate the Helcat's stealth shield, and slowly but surely it became outmatched by newer Zoids. As a result, the same stealth tech would be later used on more capable Zoids like the Saber Tiger, and the Helcat would eventually be used as the base for an Organoid System-equipped Zoid- the Lightning Saix, on September ZAC 2100.

Helcat was one of three new Red Mutants from the Blue Moon to join Krark near the end of the UK Zoids comics series. It worked with Znake and Scarab as a commando to protect Red Scavenger's secrets. Before the comic was cancelled, Helcat fought against Zabre in the mountains.

Helcats first appeared in episode 39, "The Invisible Enemy". Van Flyheight, Fiona, and Thomas Shubaltz were dispatched by the Guardian Force to investigate a series of attacks in a remote section along the Helic/Guylos border. It turned out that the attacks were being helmed by Hiltz and his thugs, who used Helcats to guard a secret cave where a core from one of the two scorpion-type Zoids needed to create the Death Stinger was being recovered.

Another Helcat featured prominently in Episode 52, "The Boy from the Ruins". After sustaining fatal damage to the Blade Liger in a battle against the Geno Breaker in the previous episode, Van falls out of his Zoid and into a river and is washed downstream. He washes ashore at a village, but the villagers offer him no help, and he faints. When Van awakens, he finds himself in a cave, with a child named Nichalo, and his Zoid; a white Helcat named "Tiroll". Van shows the boy how to pilot the Helcat. It was later revealed that Nichalo and Tiroll died while defending their village from an attack by Republican soldiers many years prior to the story, implying that Van encountered Nichalo's and Tiroll's ghosts.

In various episodes, Helcats also appeared in New Century. These Zoids were usually piloted by miscellaneous Backdraft pilots. There were several instances where these Helcats were mounted with micronized CP-02 and -03 units designed for the Zaber Fang. There was never a kit made of this variant.

A black Helcat is piloted by Doug, a minor character in Fuzors. He first appears in episode 15, after being defeated by the wild Dispelow and Evo Flyer. 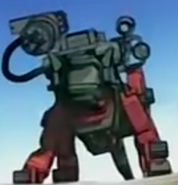 The Helcat made an appearance in the Original Battle Game and Trading Collection Card releases of Zoids Trading Cards.

The Atak Kat (as it is called) features in the New Century manga. Three are used by Team Mord. They attempt to throw the battle by kidnapping Leena, and this proves successful in defeating Brad. However, before the team could defeat Bit, Jamie managed to rescue Leena, allowing Bit to promptly defeat all three Zoids.

The Helcat includes 4 frames[8] and a wind-up motor. It is colored in a light grey and red. It has a standard pilot figure and a green canopy.

The Helcat was released as part of the Spider-Man and Zoids line in 1987.

The Helcat was released in a slightly new color scheme as a part of the Zoids (1999) line. There were no changes to the model itself, and it also included a standard pilot figure.

The Helcat was released as part of the Zoids: Build Customize Mobilize line, under the name Atak Kat[9]. The Zoid itself was identical to the Zoids (1999) version.

The Helcat was released as a part of the Zoids Graphics line. This version is almost identical to the 1983 version, with the only difference being that the colors are brighter. The Zoid includes a Zoids Graphics Comic and a diorama set.

This version of the Helcat was released as part of the Zoids VS II line, along with the Desert Liger and the Snipe Master Blue Unicorn. This version was recolored in a dark green, black, and dark grey color scheme with a green canopy, and features a standard blue pilot. The color of the caps have been known to be inconsistent. They are either shades of red or orange, or a mixture of both.

The box indicates the name as simply "Helcat", but the Zoid itself is referred to as Helcat Noir like in the game. The box shows stickers that correspond to the 1999 version, and the instruction sheet does as well, but the kit actually contains an all-new custom sticker sheet.