The Heldigunner (ヘルディガンナー EZ-011 also stylized as Hel Digunner) is an Iguana-type Zoid, and one of over 200 species of bio-mechanical lifeforms that form the Zoids race depicted in TOMY's Zoids Franchise.

The Zoid is capable of operating on land and in the water with equal effectiveness, making it an ideal amphibious assault unit. It is also capable of burrowing into the ground and tunneling through anything short of dense bedrock. The Heldigunner's main cannon is a powerful long-ranged beam weapon, composed of three separate cannons that fire simultaneously. This weapon is in turn powered by energy fed from its specialized power system. Additionally, the Heldigunner was very well armored for its size, with an overall level of protection comparable to some larger Zoids.

The Heldigunner was originally one of the “Dark” Zoids; built by bonding the rare material called Deochalcum to the Zoid's core. This allows them to absorb light and heat into their bodies, and convert it into power for their weapons systems.

The Heldigunner first appeared in approx ZAC 2051, when forces from the Guylos Empire attacked the Central Continent. The Dark Zoid’s power sources had a detrimental effect on the environment around them, causing plants to wilt, animals to die, rivers to dry up and the very ground itself to crack. The Heldigunner was used for amphibious assaults and, alongside the Deadborder, were used to attack the armed forces of both the Helic Republic and the Zenebas Empire.

Heldigunners were also used to defend the Dark Continent against the Helic invasion of Nyx. The Zoids were used as the first line of defense, patrolling the Continent's costs and attacking the Helic forces before they could land. Many Helic Zoids were destroyed by these attacks, substantially reducing the forces that actually reached the continent. Heldigunners also were used to defend the interior of the continent.

All existing Heldigunners were destroyed when a meteor struck Zi in ZAC 2056. The destruction of much of the Dark Continent, along with the wider changes across Zi, destroyed the sources of the ores needed to construct the Zoid’s power sources. While most of the original Heldigunners were destroyed, and the ability to manufacture them was lost, the design itself survived. Redesigned to use conventional power sources, the Heldigunner became a mainstay of the new Guylos army.

During the invasion of the Western Continent in ZAC 2099, the Heldigunner was used alongside the Red Horn and Brachios to spearhead the Guylos assaults. Heldigunners lead the amphibious landings, using their considerable firepower to dispatch most of the initial defenders. The Zoids were also used during the land war, proving to be adept at desert warfare.

The Heldigunner first appeared in Zoids: Chaotic Century and again in Zoids: Guardian Force, where it was used as a mainstay of the Guylos Empire's forces. The Zoids also appeared with other groups that the heroes encountered.

The most notable Heldigunners were piloted by Albert and Ross, Crossbow Brothers, a pair of mercenaries. Their Desert Heldigunners differed from the standard type by sporting a desert camouflage color scheme and retractable tail blades. The Crossbow Brothers were close to defeating Van Flyheight and his new Blade Liger, by utilizing teamwork to attack it from above and below simultaneously. However, Van was able to defeat them.

In the final episodes of Chaotic Century, a squad of Heldigunners protecting the Imperial Palace were depicted in the colors of the Original Japanese Release version.

Heldigunners identical to those owned by the Crossbow Brothers would be seen used by a gang of mercenaries working for Hiltz called "the Zoid Hunters," in an episode of the same name. The Heldigunners were used to round up Wild Zoids, whose cores were removed and subjected to experimentation. The Heldigunners would be destroyed by Van, Thomas, and Irvine at the end of the episode.

A swarm of Heldigunners would later assist Rease and her Psycho Geno Saurer to hold off Van while Hiltz attacked New Helic City with the Death Stinger.

In Zoids: New Century, a Heldigunner was used by Sebastian, one of Harry Champ's robot pilots. This Zoid was somewhat modified, sporting a pair of heavily modified CP-10 Supercannons on its sides; reduced in size and power, as actual Supercannons are longer than a Heldigunner. Like the rest of the Champ Team's Zoids, except for Harry's Dark Horn, this version is not available as a model, and can only be built with considerable customization. Also, on one occasion, the first battle with Naomi to be exact, a Heldigunner turret was used by Bit Cloud's Liger Zero.

A single Heldigunner appeared in episode 16 of Zoids: Fuzors, used by Dan and Matt. Dan prefers to call his Zoid Hel D. 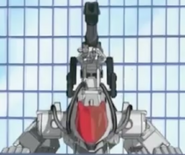 Heldigunner with new power parts from the empire

The Heldigunner was featured as part of the Empire Booster Packs for the Original Battle Card Game of Zoids Trading Cards.

The Heldigunner was released in Japan as part of the Zoids (1983) line. It was introduced in 1989.

The Heldigunner kit comes on four frames, along with a wind-up motor, eight rubber caps, a frame of rubber tubes (common with the Deadborder), a clear canopy, a small dull chromed silver pilot, and label sheets. The Zoid is molded in black and neon green, with grey tubes and a clear canopy. The Zoid's motor and other green parts, as well as the labels, glow in the dark. The Zoid's body halves do not completely join at the back; a small slit allows for the tail's movement. Whether this feature was intentional in its design remains unknown but it is carried through to all subsequent versions.

The Zoid uses a wind-up motor for its motion; once wound, the Heldigunner will walk forward while opening its jaws and raising and lowering its cannons. The Zoid's tail can be manually positioned, while the canopy can be opened, and the tail-mounted cannon can be rotated. The cannon has a position for a second pilot figure, however only one is included with the kit. The grey tubes in this kit are prone to ripping and breaking.

The Heldigunner was re-released in the Technozoids line in the US and Canada, under the name Demon Lizard[6]. This version was identical in color to the OJR version, but the green parts and stickers do not glow.

The Heldigunner was released as a part of the Zoids 2 line, under the name Demon Lizard. This version was colored in chrome silver, grey, and red, with a clear canopy.

The Heldigunner was released in 1999 with the first wave of the Zoids (1999) line. The Zoid was colored in dull metallic grey and dull red, with a red canopy and a blue pilot. The structure flaws from the original version were retained. The tubes were molded from a brittle rubber.

The Heldigunner was released as part of the Zoids: Build Customize Mobilize line under the name "Hel Digunner"[7]. In North America the Zoid was Hasbro branded, while the international version was TOMY branded. The zoid was released in England in 2004. There were no changes to the model in this release.

The Heldigunner kit was released in the Rebirth Century line. The Zoid is identical to the original version, except for the packaging and the sticker sheet, which does not glow in the dark.