The Hover Cargo (ホバーカーゴ) is a Snail-type Zoid, one of over 200 mechanical lifeforms depicted by TOMY's Zoids model, toy, and media franchise. Seen in the Zoids New Century anime series as a transport for both Zoids and people.

The Hover Cargo played a major role in the Zoids: New Century series. It served as a transport and mobile repair station for the Blitz Team, and also featured the machinery that made Liger Zero's mid-battle CAS system possible. It is unclear if the Hover Cargo in New Century is unique, being a creation of Steve Toros or if it is just a highly modified version of a regular Hover Cargo. During the series, the Hover Cargo receives a number of upgrades, the first being the above mentioned ability to CAS the Liger Zero, and others include an energy shield strong enough to "deflect shots from a Death Saurer's charged particle gun". It is also mentioned that the hover cargo has climate control in every room, and is made with Zoid Magnite armour which can survive the crushing depths of the ocean floor. 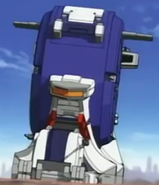 The Hover Cargo appeared in both the Zoids Saga and Zoids VS series. It is obtained in Zoids Legacy after the Blitz Team joins the player's party in-game. The Hover Cargo can transverse both land and shallow water in the game. In Zoids VS II (Zoids Battle Legends), the player is assigned to protect a Hover Cargo multiple times during the Republic Mission Mode while it transports the Cyclops.

A Hover Cargo would be seen transporting a Konig Wolf in the Zoids Web Comic.

A Hover Cargo also appears in the Chaotic Century manga. It first appears when fighting against the rogue Death Stinger. Van boards the Hover Cargo to transplant Caesar's Zoid core into that of the new Liger Zero.

The Hover Cargo was released as a pre-built "playset". Released in America by Hasbro, the Hover Cargo came with miniature Shield Liger and Dibison models.