The Iguan (イグアン EZ-017, also written Iguanasaur) is an Iguanodon-type of Zoid, a race of biomechanical lifeforms from the fictional Zoids universe.

The Iguan is the Imperial counterpart to the Helic Zoid, Godos, as both Zoids utilize many of the same spures needed to build the Zoid's main body. However, the Iguan is equipped with the standard Zenebas "clampshell" canopy style, as opposed to the standard Helic "whitehead" canopy style seen with Zoids like the Godos. In addition, the Iguan has its own set of weapons that differ from Godos' as well as Customize Parts options that are different from the Customize Parts compatible with Godos.

The Iguan appeared as a common, wandering monster in the Zoids Saga series, and it can also be obtained by upgrading a Godos.

The Iguan was featured as part of the Original Battle Game and Trading Collection Card releases of Zoids Trading Cards. 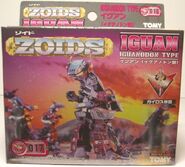 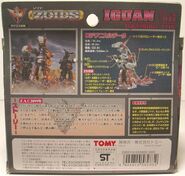 The Iguan was first released as part of the Zoids (1983) line, it was introduced in 1986, with production continuing until about 1988.

The Iguan comes on four frames along with a small wind-up motor, a separate head piece, a clear canopy, four rubber caps, a small chrome silver pilot, and label sheets. The Iguan is moulded in maroon and silver, with a red canopy. Two of the frames are shared with the Godos. The head was shared with several other early Imperial Zoids, including the Molga and Malder.

The Zoid uses a simple wind-up motor for its motion; once wound, the Iguan will walk forwards and wave its arms. The head, weapons, and booster can be manually positioned.

The Iguan was released in Europe as part of the Spider-Man and Zoids line. Introduced in 1987, it bore the name Zillon. This version was coloured black and grey instead of silver and red, with orange canopy.

A version of Iguan was seen in the Robo Strux line, but did not reach mass production. Named Lizard, it was a Zillon, but with reversed colours (black was becoming grey and vice-versa). It appeared on several boxes, on an instruction booklet where its name was written, and in a TV advert.

The Iguan was released as part of the Zoids (1999) line. Introduced in 1999, the Iguan’s design was unchanged, but the colours were altered; the Zoid was dull silver and dull red, with a green canopy and a blue pilot.

An upgrade kit was produced for the Iguan, the CP-08 Pile Driver unit. In essence a large spear, the CP-08 is mounted on the Zoid’s right arm. However, it tends to overbalance the Zoid, and reduces the model's ability to walk.

The Zoid was released as part of the Zoids: Build Customize Mobilize line, under the name Iguanasaur[7]. The only changes made were to the packaging.

The American version was Hasbro branded, while the international version was TOMY branded.

A kit used to advertise Takara Tomy's Dark Zoids Army. The kit was released with the Twinhorn's Dark Version included on August of 2008.

The HMM Iguan was released in September 2013. A highly detailed and articulated model kit, it is molded in multiple colors at 1/72 scale. 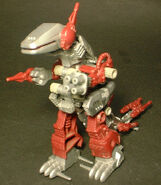 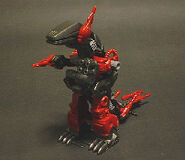 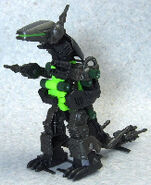