Jamie Hemeros[2] is a fictional character in Zoids: New Century. A member of the Blitz Team and its strategist, he is one of the main characters.

Jamie does all the paperwork and determines the team's tactics for each battle. He goes over such plans with Bit Cloud, Brad Hunter, and Leena Toros in detail, even if they don't listen.

For the first half of the series, Jamie pilots a Pteras, which was his pride and joy. Despite his obvious feelings for the Zoid, Dr. Toros traded it for a Raynos mid-way through the series. When he was piloting the Raynos, he entered a subconscious state known as the Wild Eagle.

Jamie features in the New century manga. He fills much the same role as the anime. In chapter 1 he rescues Leena from kidnappers while Bit and Brad stall for time. He pilots her Dibison, and is seen holding a gun. He never participates in Zoid battles, and there is no mention of his Pteras, Raynos, or the Wild Eagle persona.

Jamie gets along well with the rest of his team, but they often tend to ignore his advice in battle and work on their own tactics instead. He is extremely fond of his Pteras and spends a great deal of time maintaining and polishing it. When it gets damaged (usually due to his team-mates' actions), he is seen bawling and moping about it for extended periods of time. Generally, he has quite a non-confrontational attitude, which tends to result in him getting ignored by some of his other teammates.

When he enters the Wild Eagle state, his skills increase vastly and he becomes more confident in battle, as seen from his taunting of Pierce. His voice also becomes noticeably deeper and his hair slightly more spiked up. 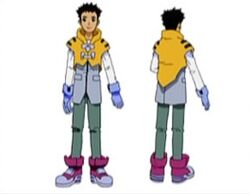 Jamie is often seen wearing a small yellow coat over a grey shirt with white sleeves, green pants, blue gloves and pink shoes. When Jamie is not in a battle, his leisure outfit consists of a blue shirt with short white sleeves and beige pants. He wore even lighter pink shoes with this outfit. Jamie has short, black, spiky hair. As mentioned above, when he enters the Wild Eagle mode, his hair becomes more spiked up, and his eyebrows grow sharper to indicate a fearless look. He has grey-beige eyes.

Ability as a Zoid Pilot[]

Jamie spends most of the series at Hover Cargo's controls as the team's main strategist. During this time, Jamie is responsible for scanning the battlefield to highlight the situation before his teammates as well as rearming and reloading the Zoids. In battle, his Pteras has been used to scout out his opponents to give his teammates forewarning more than engage them in combat. Time between battles was usually spent studying opponents and the Blitz Team to maximize their chances of winning.

For all his mental acuity, Jamie is still young and inexperienced, by consequence lacking developed combat skills. Most notably, he lacks confidence, demonstrated by the stiffness of his Raynos during his practice until he began to lose control of the Zoid. Furthermore, when not examining the battlefield, all of his wits suddenly flee, causing him to freeze up and crumble. As a result, his time in battle has been very brief and extremely non-combative, leading The Blitz Team to use him only when necessary.

The Wild Eagle persona makes Jamie swell with confidence and unleashes his full combat skill set, creating room for growth. With Jamie's alter ego in control, the Raynos showcased its high maneuverability and talent for dog fighting masterfully in their debut battle. However, The Wild Eagle is over-confident to the point of arrogance and recklessness. This has resulted in a quick dispatching for each of his subsequent appearances, and also means Jamie's strategic mind remains untapped when directly in combat.

Jamie has the following relationships with these people:

Bit: Jamie and Bit are quite good friends, but as Jamie is fairly down-to-earth, while Bit is extremely optimistic and quick to excite, Bit often disregards Jamie's advice, but is also seen supporting his ideas none the less.

Leena: Jamie and Leena are considered as friends. He tends to beat Leena at games similar to chess, which Leena is a bad sport about (tipping over the game console, saying "Oops, my foot must have slipped"), and she takes advantage of his non-confrontational personality in some small ways like taking his slot in the bath schedule.

Leon: Before he left the team, Leon appeared to get along well with Jamie; however, in order to allow Bit to enter the battle in episode 2, he secretly sabotaged Jamie's Pteras to prevent him from entering himself into the battle before Bit did.

Steve: Apart from the fact that the Doc traded his Pteras in for his Raynos, Jamie got along well with the team's manager. Jamie's logic well balances the doctor's more enthusiastic tendencies, and Dr. Toros is shown to be concerned about Jamie's finding out about some of his large purchases for power components.

Pierce: Jamie's rival from the Backdraft Group, who piloted a Zabat. The Wild Eagle was quite arrogant when addressing her, and called her a "Little Lady".

"J. Hemeros. As Assistant to Dr. Tros, he works as Blitz' strategic commander and mechanic. Normally calm and gentle, but he turns into Wild Eagle when his flying Zoids exceeds the speed of sound."

"A capable one who gives strategic commands and also works as a mechanic for the Blitz Team. Usually nice and calm, but he becomes the Brave Wild Eagle when his Zoid flies faster than the sound of speed."